When we received the sad news the crowd favorite Nannuo Yun ripe from Dá É had been drank out of existence forever, it prompted us to investigate the higher end ripe tea available within our networks. We eventually arrived at this rich bud-heavy shou from Dá É’s friend in Bada from western Xishuangbanna, from the small village of 曼迈 Mànmài near the Myanmar border. Even though Manmai isn’t in the Bulang mountains, Manmai is a Bulang minority village, like Mangjing near Jingmai as well as nearby Zhanglang of Bada. It has just over 100 households.

Loose mao cha was made from spring shengtai material in 2012 by Dá É’s friend Nán Hé from her family gardens.  After aging for 6 years, Nán Hé entrusted the leaves to be fermented to contacts at the Tianming tea factory in Menghai. They named this 2018 production 拾年 Shí nián; pressed and wrapped it in 2019.

With notes of chicory, cacao husk, and subdued plum, this is a shou chock full of the ever-so-giving thickness that smooths and soothes. Pleased to have more corners of Xishuangbanna represented and a solid shou for all the fellow ripe heads out there. 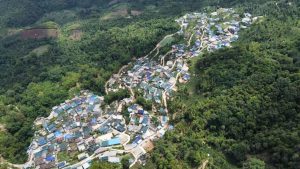 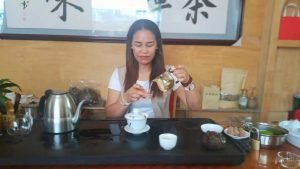