While the Hé family of Yiwu town predominantly works with material in and around Yiwu proper ("zhengshan"),  they also engage specialty small productions from plots they own in several other interesting locations around Mengla county.  When we discovered this we were of course intrigued.  They own and maintain a few dozen old growth trees around 1200 meters outside of Xiangming town of Manzhuan, one of the six great tea mountains of eastern Xishuangbanna.  For those who know Manzhuan tea, it will likely speak for itself as to how pleased we were to have the Hé family press this spring material into 200 gram bings for us.

A tea whose layers incite reverence, we recommend making time for this one.  The elegant texture is pronounced: there is a mallow-like thickness with a viscosity that would be entirely smooth except for the barely perceptible astringency dimpling its bulbous texture.  Characteristic Mengla county terroir shines in its younger unaged form as hints of unripe melon and banana tree vegetation form a flavor profile that is sure to oxidize into that inimitable sweetness that the quality aged teas from this area are known for.  With a huigan up behind your eyeballs, you may find the flavor profile of later infusions retain buoyancy and durability, able to resist the inevitable collapse into its backbone of minerality despite being pressed by more time and temperature.

More on the Hé family: if you have checked out Jinghong Zhang's book Pu'er Tea: Ancient Caravans and Urban Chic then you are already familiar with the He family, as senior Mr. Hé is written about as a prominently featured tea producer that proves successful in his endeavors to retain the classic feel of the home production Yiwu tribute tea while meeting new QS standards by investing in new state of the art production facilities.  See both Mr. Hé and his son (who has now taken over the business) in this episode of Jinghong Zhang's fascinating mini documentary.

Other teas that we carry by the Hé family: 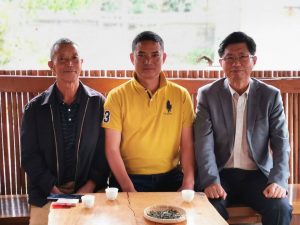