帕沙 Pàshā is a tea producing mountain area that sits in a triangle with Nannuo and Hekai; south of Nannuo, east of Hekai. It’s about ten miles as the crow flies from Stone Village of Nannuo, where Dá É grew up.  Pasha tea has experienced some fame in recent years as a prime, clean, and remote area producing fantastic Menghai style terroir teas, often compared with Hekai and Banzhang teas.  Pasha is a notable territory bridge between the milky vegetal tones found more in the teas from mid to northern Menghai county - Nannuo/Mengsong teas and the leathery, brazen character of more southerly Bulang mountain teas.

Dá É’s boyfriend has a grade school era friend in Pasha Zhongzhai who tends to old trees named Mr. Cuō.  Dá É and her boyfriend were able to make a spring and autumn trips to visit Mr. Cuo this year, each time coming back with fresh leaves that Dá É processed herself in Nannuo. Upon sampling her spring Pasha teas grown by Mr. Cuo, we are very excited about this channel moving forward.  Mr. Cuo's old gardens in the optimal environment of Pasha, combined with Dá É's expert processing style makes for a real treat: harvested on October 12th from old gardens at 1850 meters, this tea produces a thickness in the jowls that frames a slightly smoky bone broth flavor signature to Pasha, more pronounced in the autumn.  帕沙中寨 Pàshā Zhōngzhài "middle village" has just over 100 households, whose people are Akha, or Hani ethnicity, village like the rest of Pasha shan.

More expensive than most Nannuo teas, yet less so than many more famous growing areas south of Pasha, we find that the price point for Autumn Pasha is a great value for the quality that it offers. 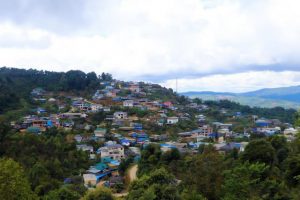 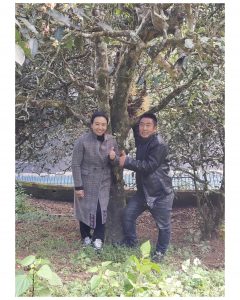 Dá É and her boyfriend in front of one of Mr. Cuo's more prized gushu trees 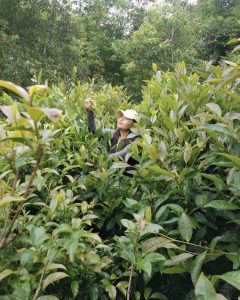 Dá É takes the leaves back to Nannuo, overseeing the finer processing

Learn more about autumn teas and this release here.