曼松 Mànsōng tea may be the most old school and classy pu'er tea you can find.  Mansong village is within the mountain group known as 倚邦 Yǐbāng, and before Yiwu town was the main trade hub of the tribute grade (贡茶 gòng chá) export raw pu'er in Xishuangbanna prefecture, it was the area of Yibang.  Mansong teas are renowned for their high fragrance and sweetness, and represents the some of most nostalgia-inducing, classic pu'er teas the chinese connoisseur market wax poetic and pine over.   Mansong village is close to Manzhuan, and actually sits at a relatively low elevation of 900 meters. 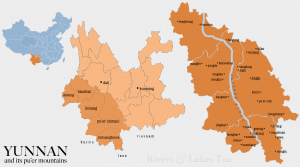 As is the case in many famous pu'er mountains, genuine ancient growth trees in Mansong are actually very limited in their numbers.  Wars, fires, and alternative crop transplanting throughout the last hundred years or so has drastically reduced the remaining number of truly old growth Mansong trees to just 327, according to one estimate.  Most of the Mansong gushu seems to be in either 王子山 Wángzǐshān or 王子后 Wángzǐhòu areas within Mansong, and can fetch staggering prices that rival Lao Banzhang and Bingdao area teas.

The Hé family's most recent sourcing reconnaissance to the legendary village gave way to a fortuitous connection to a tea farming family belonging to the Yi ethnic minority group in the area of 背阴山 Bèiyīnshān.  Wangzishan is also comprised of Yi people, whereas Wangzihou is mostly Dai.  The family has several nice stands of 50 year old 生态 shengtai (ecological garden) trees.  This flush was harvested in late March before the big rains of April.  The Hé family processed them and pressed them into these 100 gram cakes.

This year's Beiyinshan area tea from Mansong has a refreshing bready minerality, like a sipping down the aromatics of a recently opened biscuit.  The experience dances a bit higher on the palate.  For folks that masochistically chase bitter, brew it long and strong and you'll be rewarded with a unique and classy kind of punch that still retains some sweetness and character.  Read more about the famed soft sweetness that greater Yiwu area teas have here.

Good for sipping now or for trying to hide from yourself for aged consumption down the road. 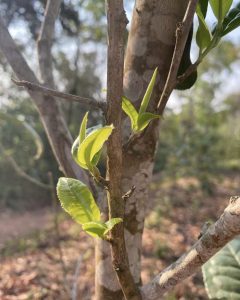 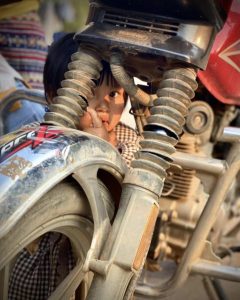 More on the He family: if you have checked out Jinghong Zhang's book Pu'er Tea: Ancient Caravans and Urban Chic then you are already familiar with the He family, as senior Mr. He is written about as a prominently featured tea producer that proves successful in his endeavors to retain the classic feel of the home production Yiwu tribute tea while meeting new QS standards by investing in new state of the art production facilities.  See both Mr. He and his son (who has now taken over the business) in this episode of Jinghong Zhang's fascinating mini documentary.

Other teas from the Hé family: