Harvested on March 12th, this year's Gan Lu is from a higher elevation (therefore more later flushing) garden than the first wave of mid-late February plucks lower on the slopes of the Mingshan growing area on and around the famed Meng Ding Mountain.  This pre-equinox lot easily meets the qualification of a mingqian harvest, as the full flavor and vivid chi of this tea will showcase.

Creamy, vegetal, aromatic, fruity even, genuine Gan Lu from Meng Ding is the crowning green tea of Western China, perhaps the only style to rival the more fashionable greens of the East coast.

Notable is the meticulous process that these early flush sprouts undergo.  Sprouts are carefully monitored and harvested just 5-6 days after initially emerging.  After the tiny sprouts are withered, the production features 著名的三炒三揉制茶工艺 (“the famous three-fired, three-kneaded tea making process”) a method that coaxes out flavor by frying the leaves in a high-temperature wok for short times before rolling/bruising them three separate times as a set, before being dried.  This process accentuates flavors and aromas, as well brings all of the tea oils to the surface, unlocking them ahead of time for an exquisite first brew.  This very early tippy tea contains the most invigorating compounds stored throughout winter; you will definitely feel its energy coursing through you!

Teas like this are often booked in advance by upper class tea enthusiasts ahead of time and typically would never make it to the tea world of the West.  Indeed, we are fortunate to have such a connection in Mr. Zheng, a retired government official of Ya'an whom we connected with during our time in the area in 2019.

More about our time in Ya'an and Meng Ding Shan here in our blog as well as reviews of previous year's batch here.  This year we have also sourced a slightly later harvested green Meng Ding Mao Feng, as well as a yellow tea, Meng Ding Huang Ya, through this same connection. 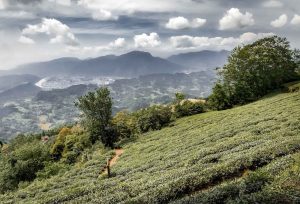