Apart from feeling like we needed to shower every two hours or so due to the humidity, Taiwan was a completely surprising and magnificent adventure for us. On our first day, we visited Longshan temple in the heart of one of Taipei’s oldest districts. The locals there told us that during WW2 the area had been bombed out and most of the temple had been destroyed save for one statue of the goddess Guanyin. Due to the auspiciousness of the event, they re-erected the temple in dedication to the goddess with this statue being placed on the central alter. As it was our first time to Asia, we were blown away by the entire scene.
We then traveled to Pinglin hoping to meet tea farmers and visit some of the more accessible tea areas of Taiwan. When we arrived, we realized our Air bnb was actually in a tea farmers house/factory and almost every person in the town was involved in the tea industry in some way or another. Except for a convenience store, every business in the small town was involved in selling, processing, and packaging the slightly rolled oolong tea, Bao Zhong. But, this wasn’t the tea we had come to Taiwan looking to discover.
After two days of exploring tea fields and trying to fight jet lag, we finally departed and left for Lugu, the home of the famous Dong Ding oolong tea. It took us nearly a full day to get from Pinglin to Lugu, and when we arrived, it was dark and we had nowhere to stay! Much like Pinglin, Lugu is a town where the industry thrives primarily on tea and tourism, so no matter which direction you looked, there were tea shops and folks sitting outside drinking tea late into the night. We quickly hurried over to one of the tea shops and asked if there were any hotels around (we had been unable to find one on maps that was anywhere near where we were). Someone jumped up and led us to a small hostel a few streets over.
The next morning, we walked to the Lugu Tea farmers association and discovered that the annual Dong Ding oolong competition was taking place. The director, Mr.Lin, took us into the main sampling room where I was astonished by the hundreds of people in lab coats slurping (literally) thousands of samples of Dong Ding oolong tea. Mr.Lin explained to us that more than six thousand samples will be tested and the winner’s tea could sell for more than 100 times the market price for Dong Ding tea. If I recall correctly, one kilogram of the 1st place tea was nearly three thousand USD. They used two methods for testing the tea for quality: a smelling cup where the leaves would be doused in hot water so that the aroma could be inhaled, and a sipping cup where they would use a spoon to take a small sample to taste the freshly brewed tea. Most surprising was that they didn’t even swallow the tea, they spit it into cups that they carried to avoid caffeine intoxication!  Also, shocking to us were the sounds. Hundreds of people slurping at the same time. Mr. Lin explained that the judges do this to aerate the tea. They believe that it helps to get a more accurate assessment of the brew. After about 30 minutes or so we explained that the tea that we had come half way around the world for was Taiwanese High mountain tea and we were looking for a guide to take us up the mountain.

Luckily Mr.Lin’s son agreed to take us. What in my mind was going to be this road lined with tea plantations, actually turned out to be a thick dense pine forest. The ShanlinXi forest area is a coniferous forest with crystal clear streams and water falls. “Shan” in Chinese means cunninghamia evergreen tree, “lin” means forest, and “xi” means stream. Driving through the forest felt like a dive in to dark green tea heaven.

I distinctly remember the smell of pines and the commentary about the newly elected progressive Taiwanese president on the radio as we made our way to the top. We drove for what seemed like forever until we saw it. The rows upon rows of tea plants covered in mist with small streams and sunshine breaking through the clouds. The tea plants were planted in rows and were close to each other creating green lines as far as the eye can see. I told the driver to pull over so we could take in the scene for a moment. It looked like something from a book. We went to one of the many tea factories which dotted the precipice of a mountain called Long Fengxia. The tea farmers greeted us with smiles and poured fresh tea that was produced only hours before. We drank their tea until we were so tea drunk we had to take a short walk. It was an extremely overwhelming experience, but from that first encounter we have continued to be great friends and source tea from these same farmers. I am eternally grateful to have met them and hope to continue to share this tea with the world for as long as possible. 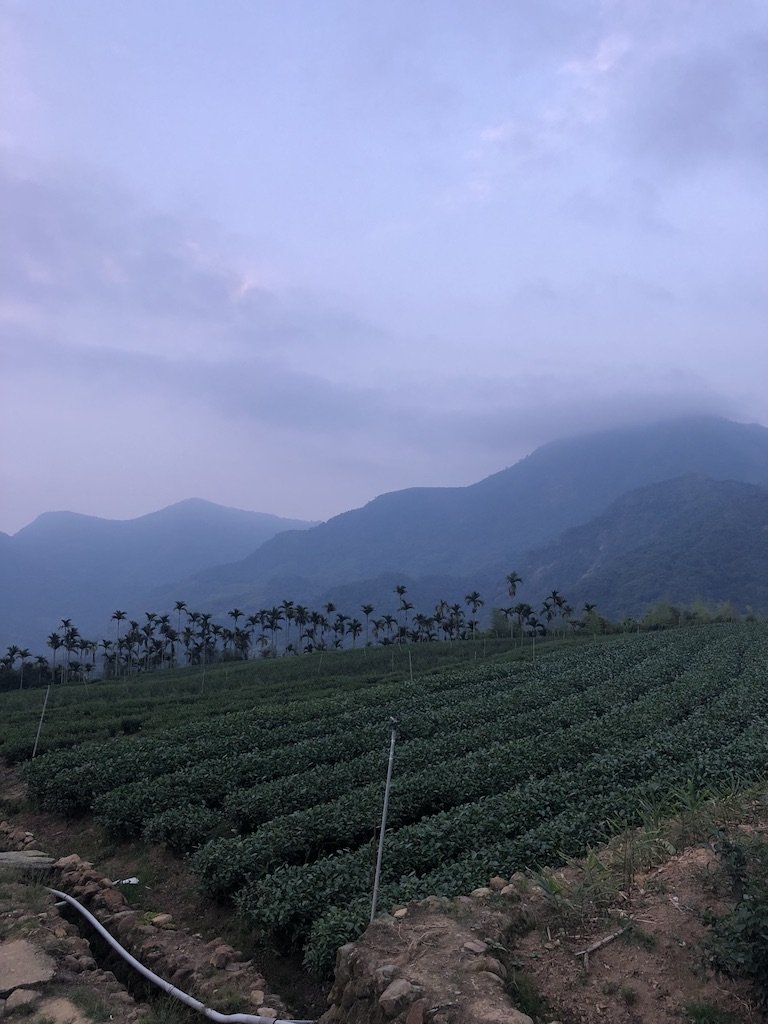 We then traveled to Pinglin hoping to meet tea farmers and visit some of the more accessible tea areas of Taiwan. When we arrived, we realized our Air bnb was actually in a tea farmers house/factory and almost every person in the town was involved in the tea industry in some way or another. Except for a convenience store, every business in the small town was involved in selling, processing, and packaging the slightly rolled oolong tea, Bao Zhong. But, this wasn’t the tea we had come to Taiwan looking to discover.

One comment on “First Encounter with Shan Lin Xi”