We continued our tea-centric tour of Ya’an guided by our gracious hosts — my friend Alex, her husband James, and his old compadre Jiqian, a retired Ya’an city official. With these allies, most everywhere we went in the city we received first class treatment.
In the history of tea, Ya’an is known for having been a main trade center along the ancient tea horse road, the old trade passage route from southern Yunnan north and then west through the Himalayas. The story told is that the Tibetans in the Himalayas suffered from malnutrition in their diets because of a lack of access to a variety of food plants growing high in the mountains, so they relied on and cherished imported phytonutrient-rich teas from both Yunnan and Sichuan provinces. Some time in the history of this tea trade, the development of a type of 黑茶 hei cha (a post-fermented dark tea) called 藏茶 Cáng cha or Tibetan Tea came about for this particular market of Tibetan consumption. Cáng cha production is still a thing, and we got to tour a cáng cha factory: the old Ya’an Tea Factory Company 雅安茶廠股份有限公司
Here, at the factory we toured the facilities, had tea and cigs with the president, and were informed of cáng cha’s sensational, cure-all, panacea properties.  Almost crestfallen, they recounted that their post-fermenting techniques were in fact stolen by sneaky Xiaguan and Dayi tea factory workers in the 1970s prior to invention of shou pu’erh.
Their distinguished history lessons and the impressive production facilities aside, we could not find anyone in the area outside of the company that claimed to enjoy this kind of tea when asked — with many getting quite the chuckle from this inquiry. And despite the relentless advocacy for cáng cha by the representatives of the Ya’an Tea Factory Company (“It has replaced water for us”), we couldn’t place what was supposed to be so appealing about it either. I hope hei cha connoisseurs will disagree with this assessment and change my mind!
On the topic of this company, one other noteworthy aspect is that the president also operates a nice hotel in downtown Ya’an called 西康大酒店. I would recommend anyone to stay there when they’re in the area — it’s apparently the first tea themed hotel in the world! And everywhere in the hotel you turn there is cáng cha — from the elevator wall panels, to the headboard of your room’s bed, the hallway ceilings, everywhere was cáng cha. The very serious and professional service and amenities juxtaposed to the over-the-top hilarious cáng cha placements (which they said purified the air) made this hotel well worth it.
The last outing of this particular outing saw us touring another Ya’an tea factory — this time one that was still producing green tea from that spring. James and his friend thought it was important to show us the steps in green tea production, but it was so late in the season at this point (the second week of May), they had struggled to find a factory that hadn’t completely wrapped up their production for the year. One factory on the outskirts of town was somehow identified as the last remaining one and we rode out to pay them a visit.
We arrived to a dimly lit, dingy tea production facility to be shuffled into a sweaty business office and given some grandpa style zhu ye qing. The wide eyed production manager seemed a bit overwhelmed by this unusual cast as he offered everyone cigarettes on our way to the production floor. 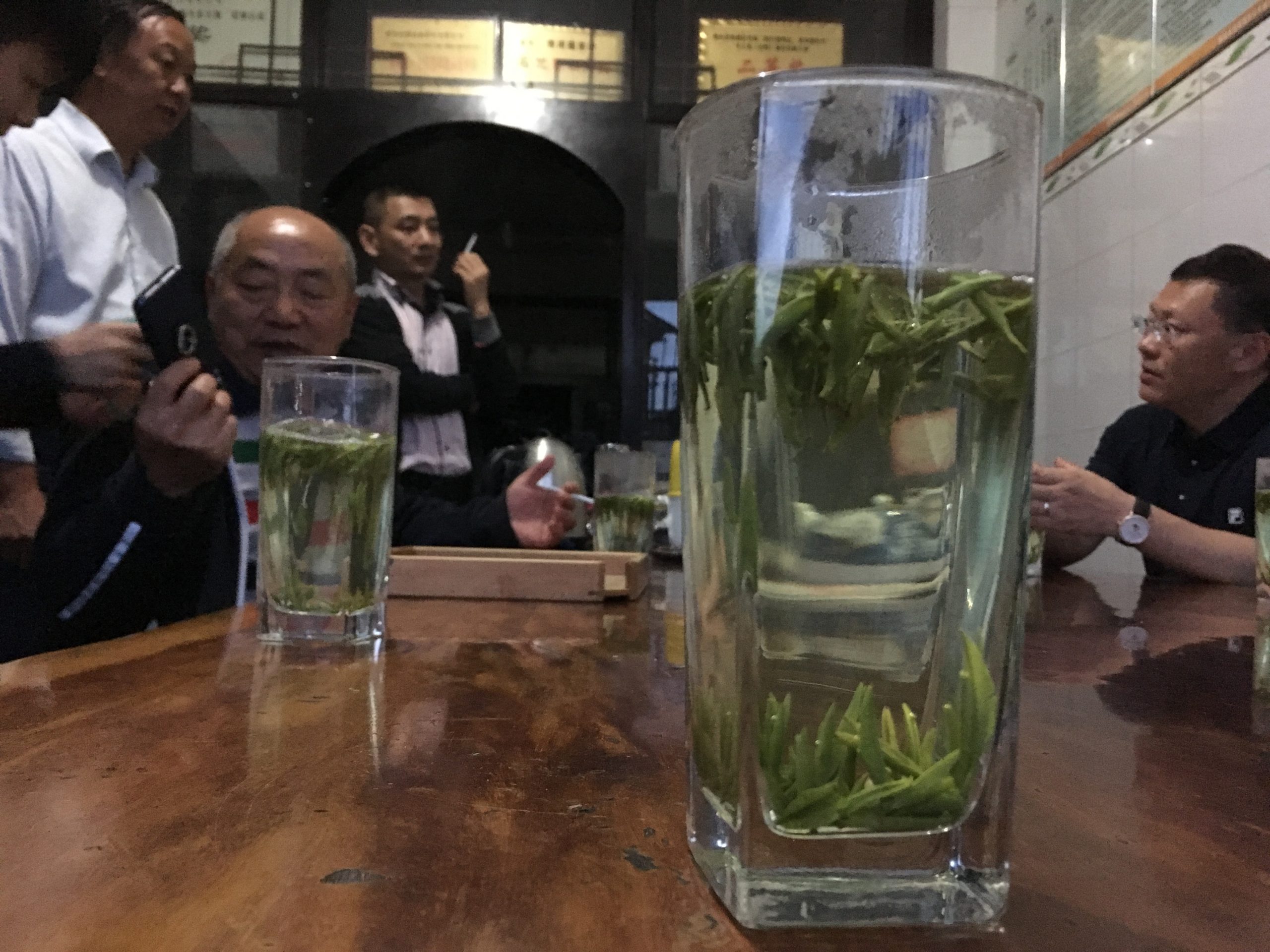 What we saw on the production floor was wild: third flush low elevation tea with a picking grade of one bud 3-4 leaves — about the lowest grade you can find. The leaves were all over the place, being kicked and tossed around on the dirty floor by workers who would occasionally ash their cigarettes indiscriminately around the piles of leaves! Every part of the process was mechanized, except for when the leaves were fed into the next machine. The machines churned and throbbed under the dimly lit fluorescent lights.
The feeling of being thrown off by all of this was immediately replaced with a kind of thankfulness that our hosts had brought us here… this was a graphic look at just how bad tea can be produced that not many people get to see. If China is known to make some of the remarkably good teas in the world, they certainly can make some of the most remarkably poor quality teas as well. I was told that this tea would sell for just a few dollars/kilo if that. It was for lower socioeconomic class workers that would grandpa style these teas all day to keep up their pace. We snapped some photos, shook hands, and prepared to depart.
After staying another night at the cang cha hotel we said our good-byes to our friends -- they would head back to Chongqing and we would head back to Chengdu before wrapping up our China trip.  Upon getting back to Chengdu we heard that 9-month pregnant Alex had went into labor on the drive home and given birth to a baby boy in the night!  She had been out of her routine, walking around a lot, drinking lots of tea, helping us with translations, and working on a college paper all at the same time -- we surmised all this extra activity definitely had given the little one the motivation to come out.  Baby magic.  After all we had to be grateful for on this chapter of our journey, now it all being associated with the birth of someone's life!  Quite the unforgettable time in Ya'an...
Tea travel blog post by Gus, June 28th 2020