During our 2019 trip, we visited three main regions: northern Fujian, southern Yunnan, and central Sichuan. The last hurrah took place in Meng Ding Mountain, just north of the city of Ya’an, about 100 km southwest of Chengdu. This area is a legend in the tea world, known as the progenitor site of first known records of wild tea plant domestication over two thousand years ago. The mountain has been honing and churning out original high-class teas ever since, casually achieving imperial court tribute status over the centuries. 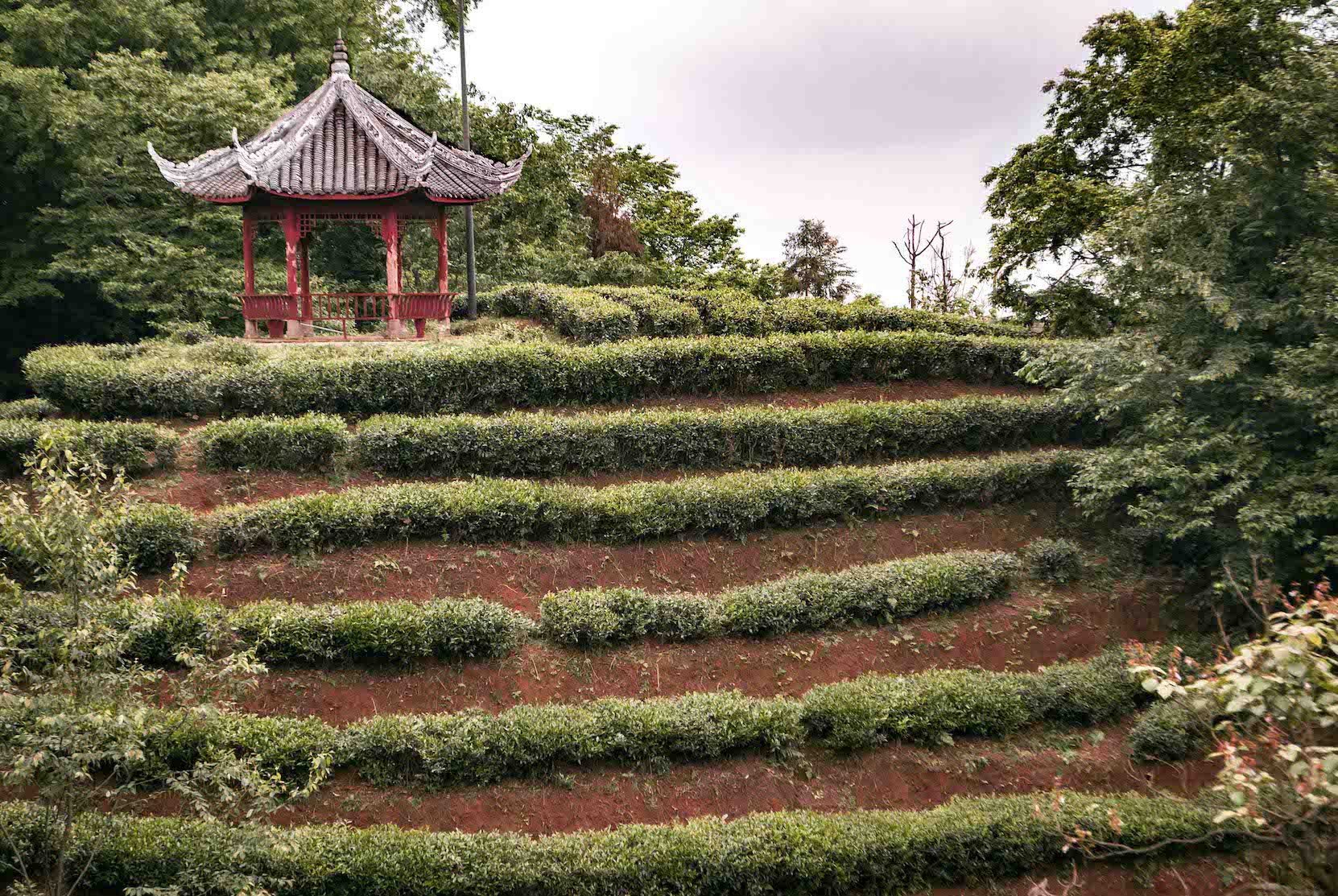 The mountain’s tea probably experienced the height of its acclaim during the Tang and Song Dynasty eras (~ 600 - 1200 AD), and these days the mountain serves as a living shrine to its long history of remarkable tea production. When you drive from Ya’an up the mountain towards the historic gardens — you get the idea why it was chosen by ancient taoists pretty quick. It’s stupid perfect for growing tea. The climate is misty and cool, the air is super clean, and the plant life is lush, thriving, and diverse. The seasons there are mild — there aren’t harsh cold winters, nor are there sweltering hot summers. Ya’an achieves over 70 inches of rain on average per year (for reference my rainy hometown in the Appalachians gets around 44). Higher climes in the area are enshrouded in mists and fog most of the time. This dims the sun’s harshness, allows for an attenuated photosynthesis process, and results in slower growth for the tea plants, thought to produce superior tea. 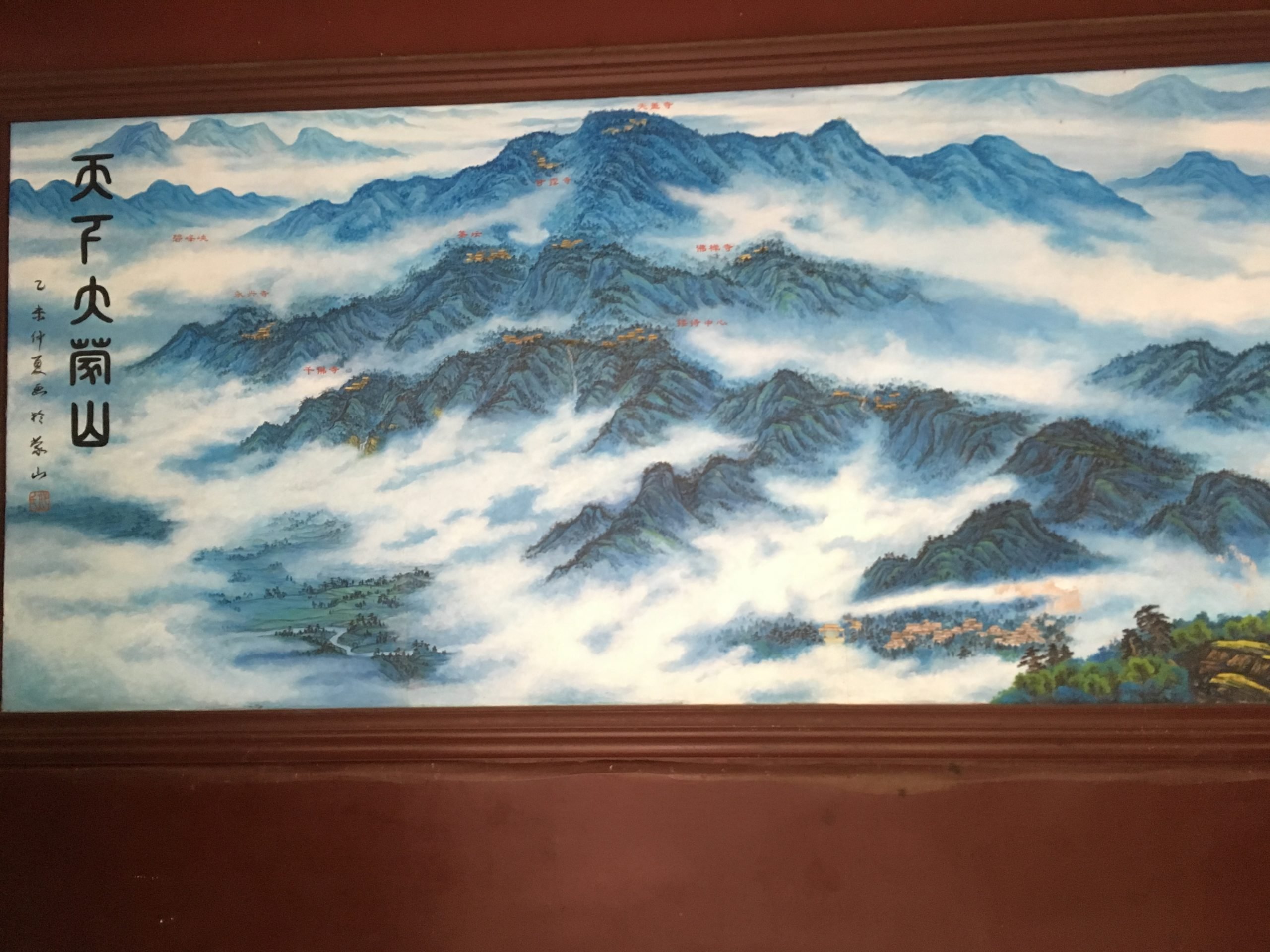 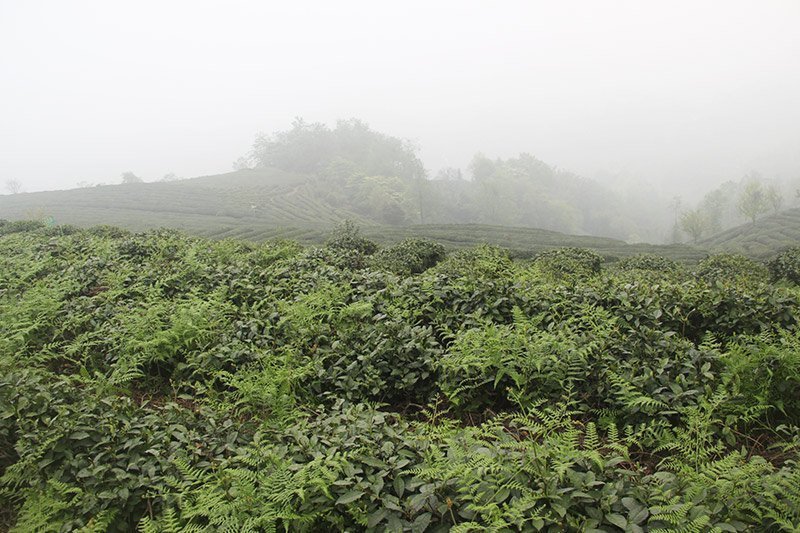 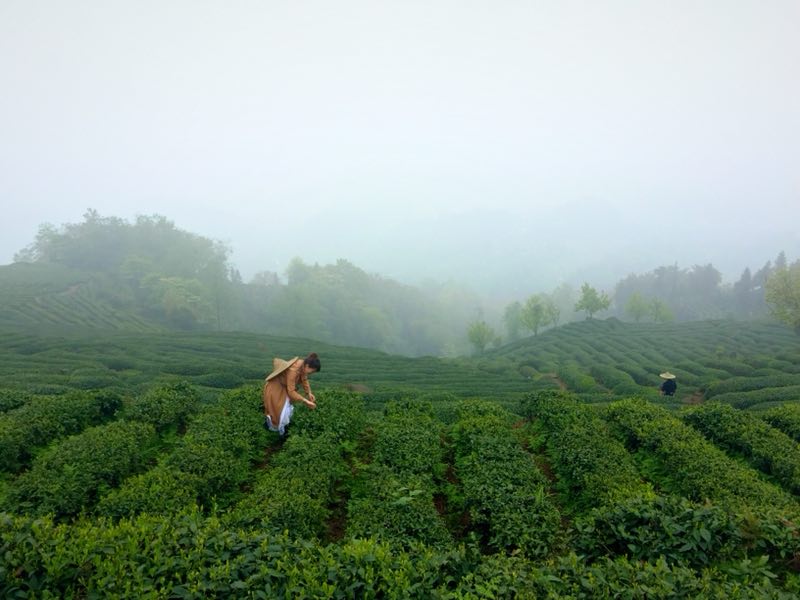 We could have taken the ski lift up, but in the true spirit of traveling in China, we opted to see just how horrified an imaginary western public safety official would deem the countless crooked, steep, and narrow-chambered steps we would inevitably encounter before every summit. 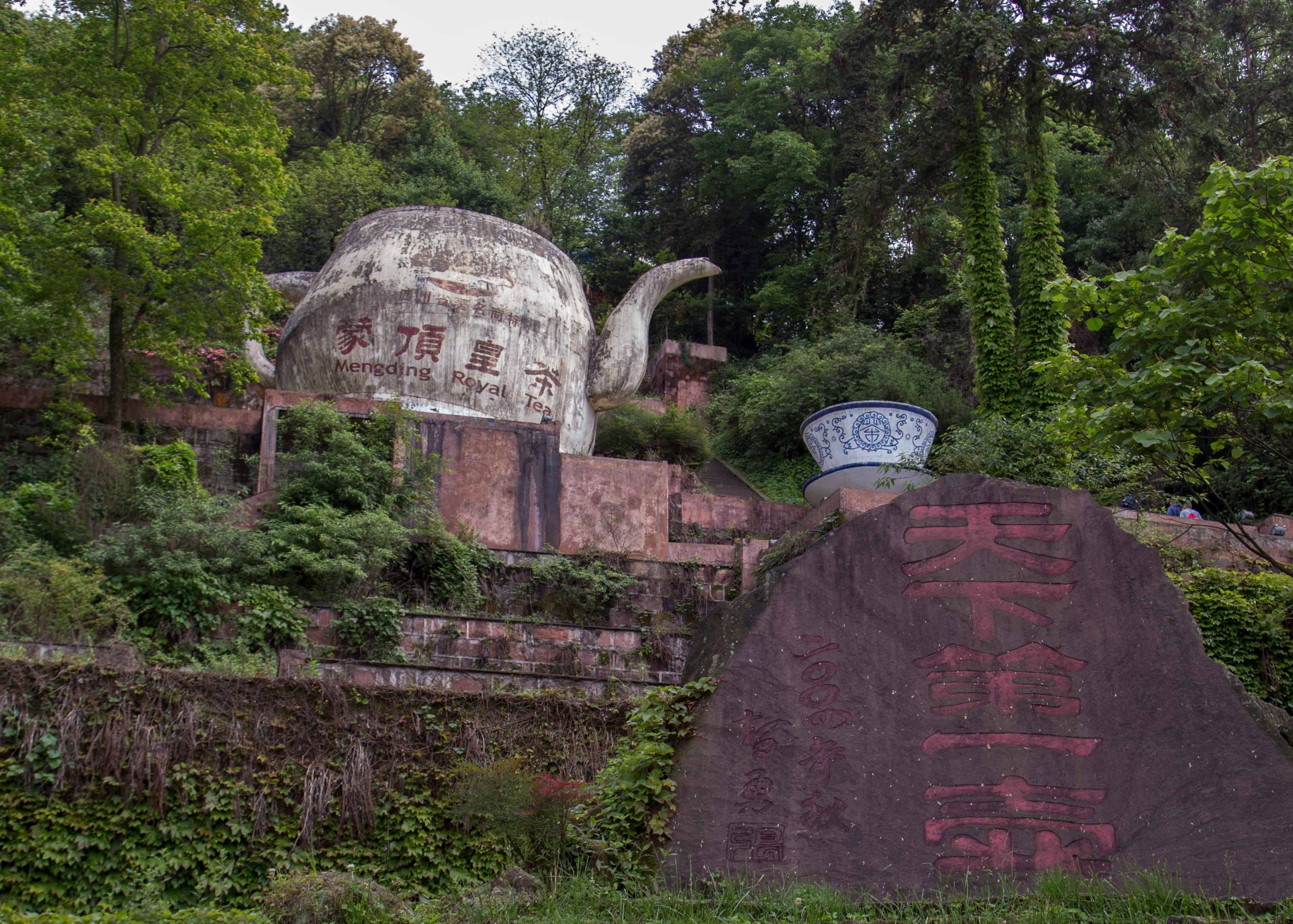 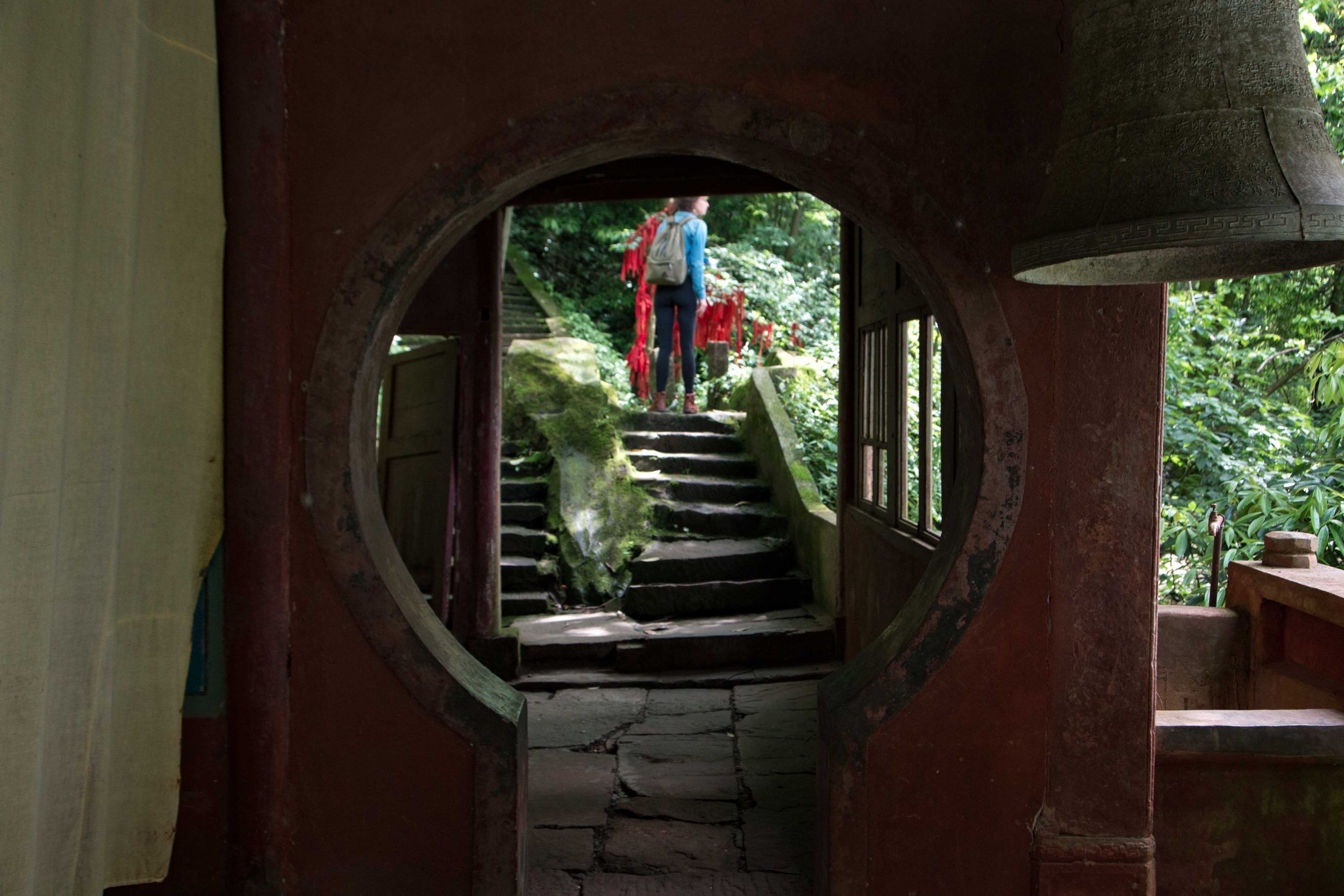 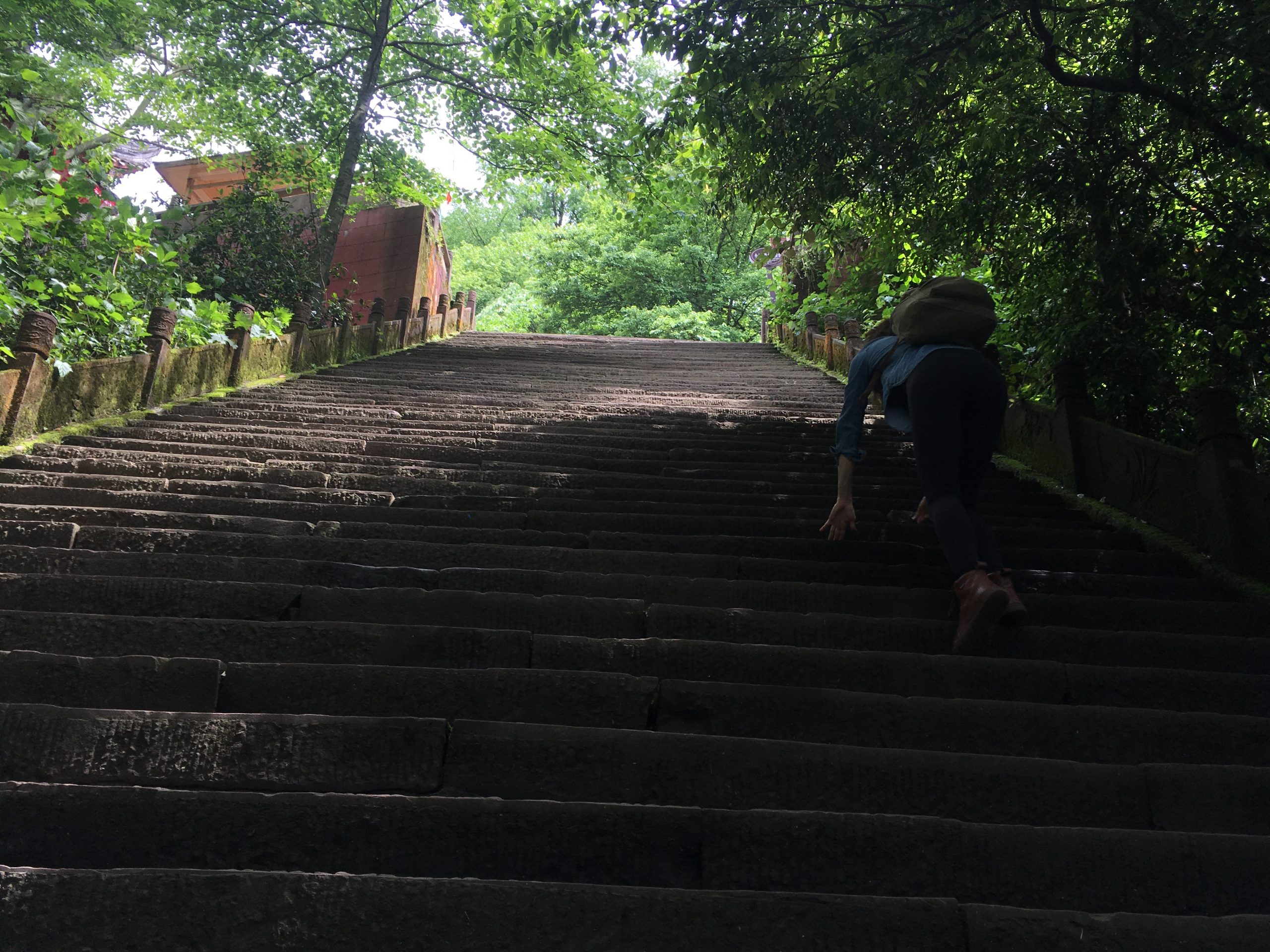 Arriving up at the top of the pavilion of Tiangai Temple, we were instantly captivated by enormous Gingko trees flanking the grounds. Story goes is that these trees are around two thousand years old, and that there used to be thirteen of them — twelve females and one male — but the male was struck by lightning and died. These other twelve remain as chaste nuns of the temple grounds. Ginkgos in general are dope because they’re living fossils of the Triassic: they haven’t budged in evolving their genome in over 200 million years despite enduring cataclysmic shifts in the Earth’s climate. The species Ginkgo biloba is not only the sole remaining species in its genus in addition to its family Gingkoaceae, but its Order Gingkoales as well… There’s nothing in the plant kingdom like these trees until you get to the distant and also rare Cycads and Gnetophytes… 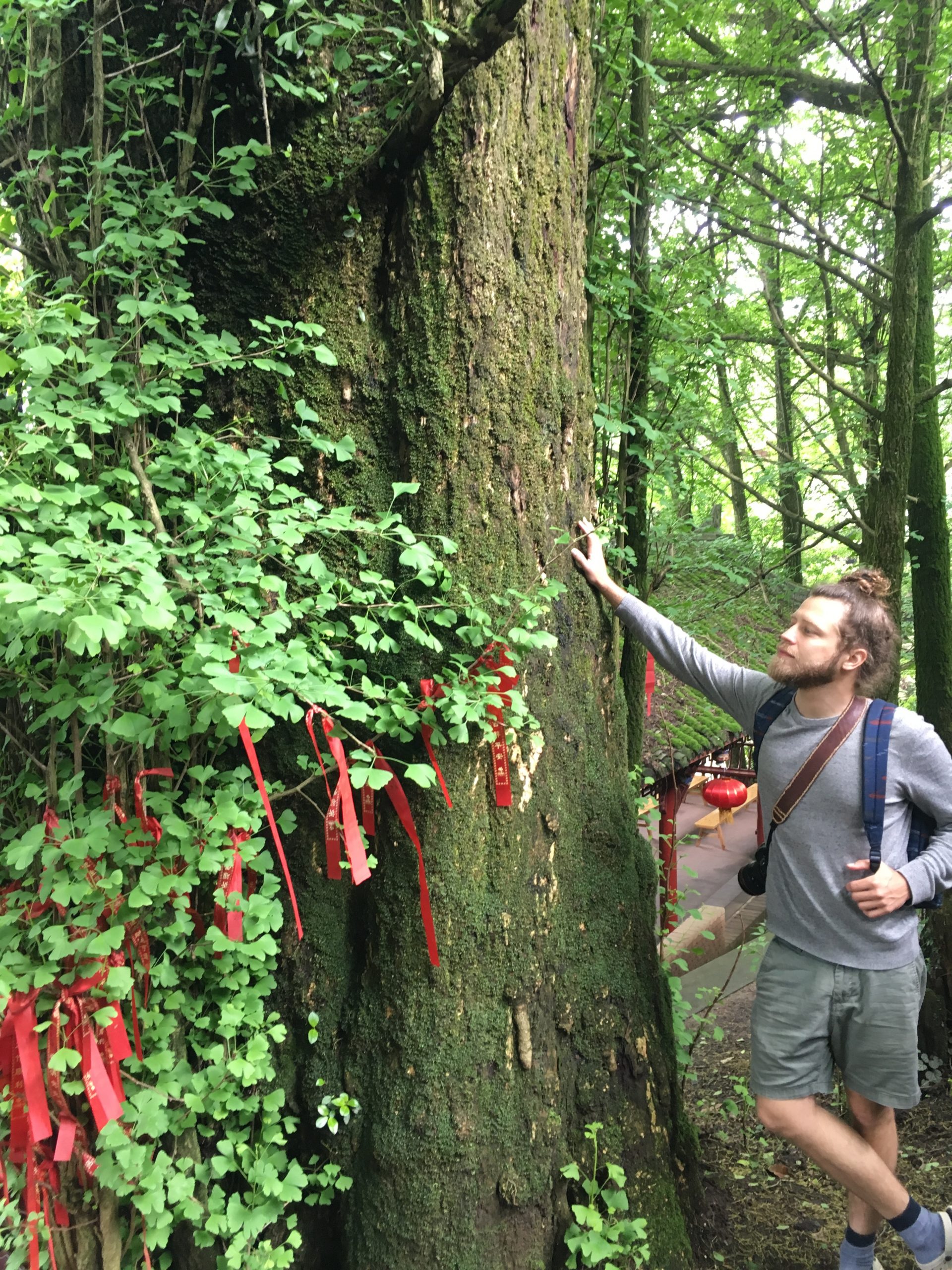 We reminded ourselves of our tea mission.  They start harvesting Mengshan tea as early as February, and as it was early May at that point, when we asked about tea everyone reminded us that we were late; that the best stuff had already been bought and sold. Indeed, the first plucks of the finest plots are even pre-bought. We surely were only going to be able to try the left-overs: second and third flushes. If it wasn’t physically impossible to accomplish visiting three major tea areas all at the perfect time of spring harvest for each, we certainly would have tried. 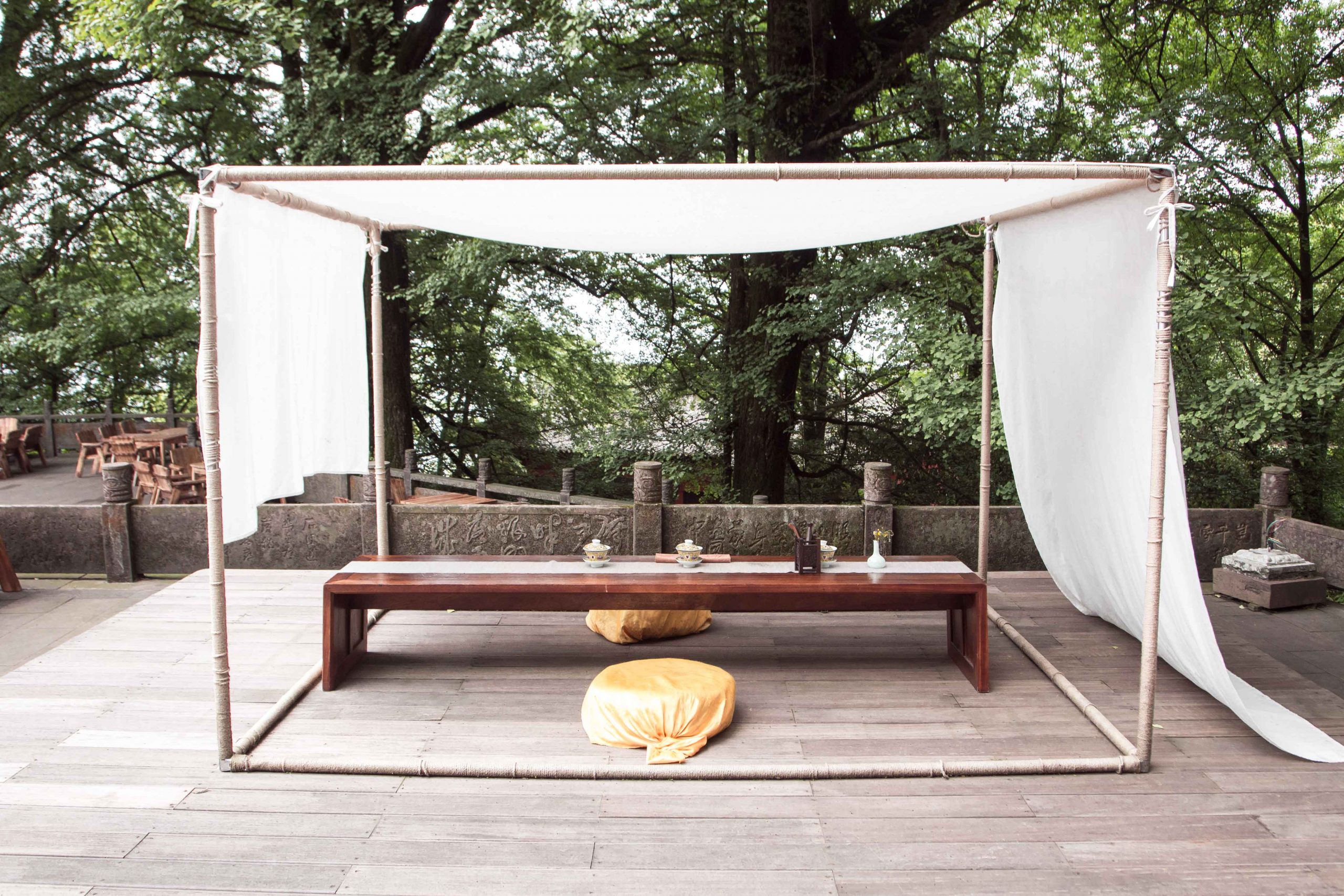 Way back in the day before ‘rona, domestic tourism was booming in China and while in epic places like these, one would experience roving throngs of out of place looking folk blissfully unaware of the fashion faux pas of wearing the tourist uniform of a fanny-pack and visor combo (and these folks weren’t hipster). This is a society that loathes venturing away from their assigned packs and into introspection, so these garrulous tourist troupes would periodically engorge your sensory experience and then decay as soon as they’d arrived. My anti-social digressions. This is all to say tea tourism is alive and well in these cha shan hotspots year-round, prime harvest time or not. Their prices don’t drop. And it’s not like you should seek out tourist shops and expect competitively priced tea, but after chatting serving you gongfu, there’s always that classic, familiar lingering awkwardness pressuring you to purchase.
In our case, we were lucky to ask about tasting some gan lu at the exact time the current residing champion of the 龙行十八式 18 Dragons tea pouring technique just getting off shift. He was waved over by the folks in the shop to serve us tea — it was in fact the same guy in the videos that everyone kept showing us to ensure we knew what was so cool and impressive about Meng Ding Shan. This guy was hot shit on the mountain, his moves were suave. Big reminders that gongfu cha can’t ever be boiled down to merely a science —  its fundamental essence will always be more as an artform. With confidence he ran us through several infusions of not only gan lu, but also huang ya, a yellow tea I was familiar with serving back at Dobra.  Huang ya has a bit more of a nuttier complexity, and he told us people on the mountain prefer to enjoy gan lu in the spring and huang ya in the fall, as the yellow leaves of the old gingkos fall to grace the courtyard just outside. 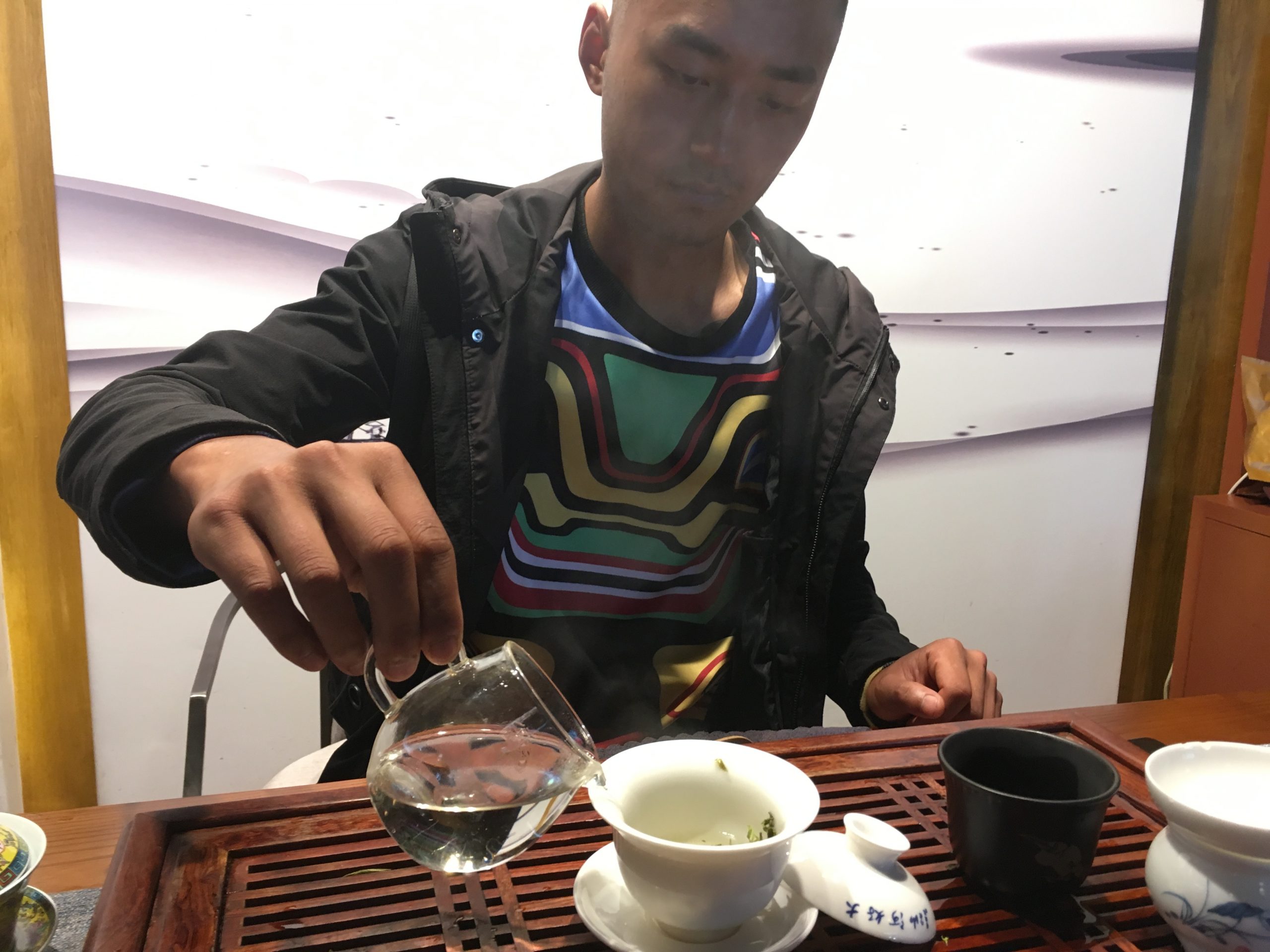 We thanked him and purchased the obligatory overpriced packet of gift shop tea and continued to explore the summit.
We had made our way to Wu Lizhen’s ancient gardens. Wu Lizhen was a seminal taoist monk figure that pioneered writing down domestication techniques for the cultivation of wild tea plants. The folks on the mountain take it a step further and claim Meng Ding to be the definitive home of the first ever developed techniques of cultivation, sometimes improperly translated as the claim to be “the birthplace of tea culture.” I’ve got tea friends with more scholarly inclinations that not only doubt this narrative, but question the existence of Wu Lizhen. China is a land of great myth, and celebrated archetypes often seem to be the culture’s lifeblood, so I remain curious and open yet always a little skeptical.  Below are some images of his garden of seven tea bushes that are reportedly the same ones he planted over two thousand years ago -- they just haven't grown much(?)  The last image is of his well, Mengquanjing, from which he drew spring water to water his plants.
The gardens atop Meng Ding mountain are some of the cleanest, most optimal conditions I’ve seen for growing tea. Like we witnessed in Wuyishan, in Mengshan there are vastly differing habitats and zones where tea is grown. Generally the higher elevation stuff and any area with more acclaim are going to demand the higher prices. In the case of Meng Ding mountain, the imperial garden material around the original Wu Lizhen garden is the most coveted, then it's the high elevation gardens surrounding that, then the higher elevation material from the other four surrounding peaks (still technically referred to as Mengshan though), and then of course you get to the gardens on the mid to lower slopes down the mountain, and eventually all the way down to the plantations down by the river (these cheap lowland teas also serve a purpose in the economy, as we will see in the next blog post). 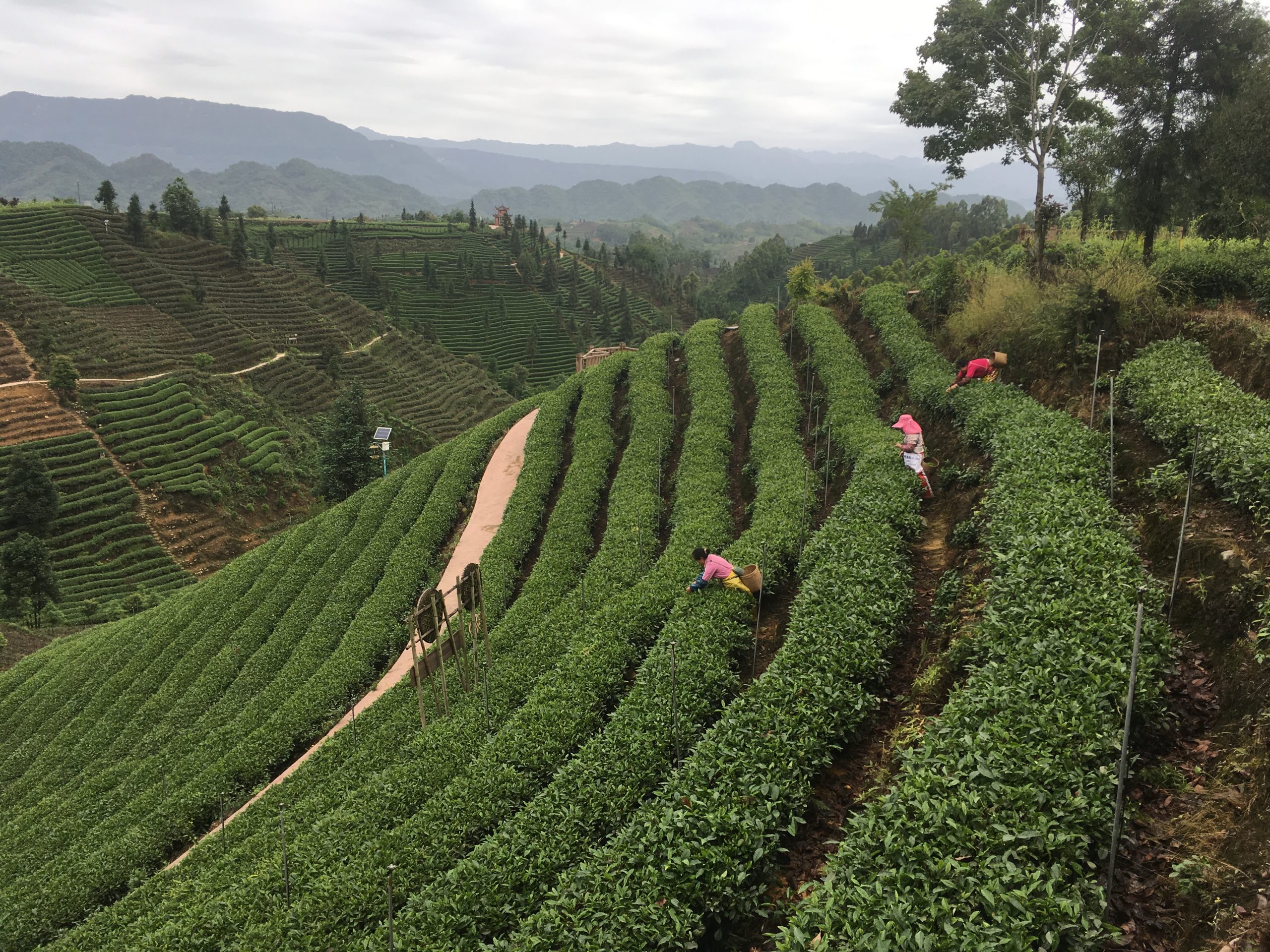 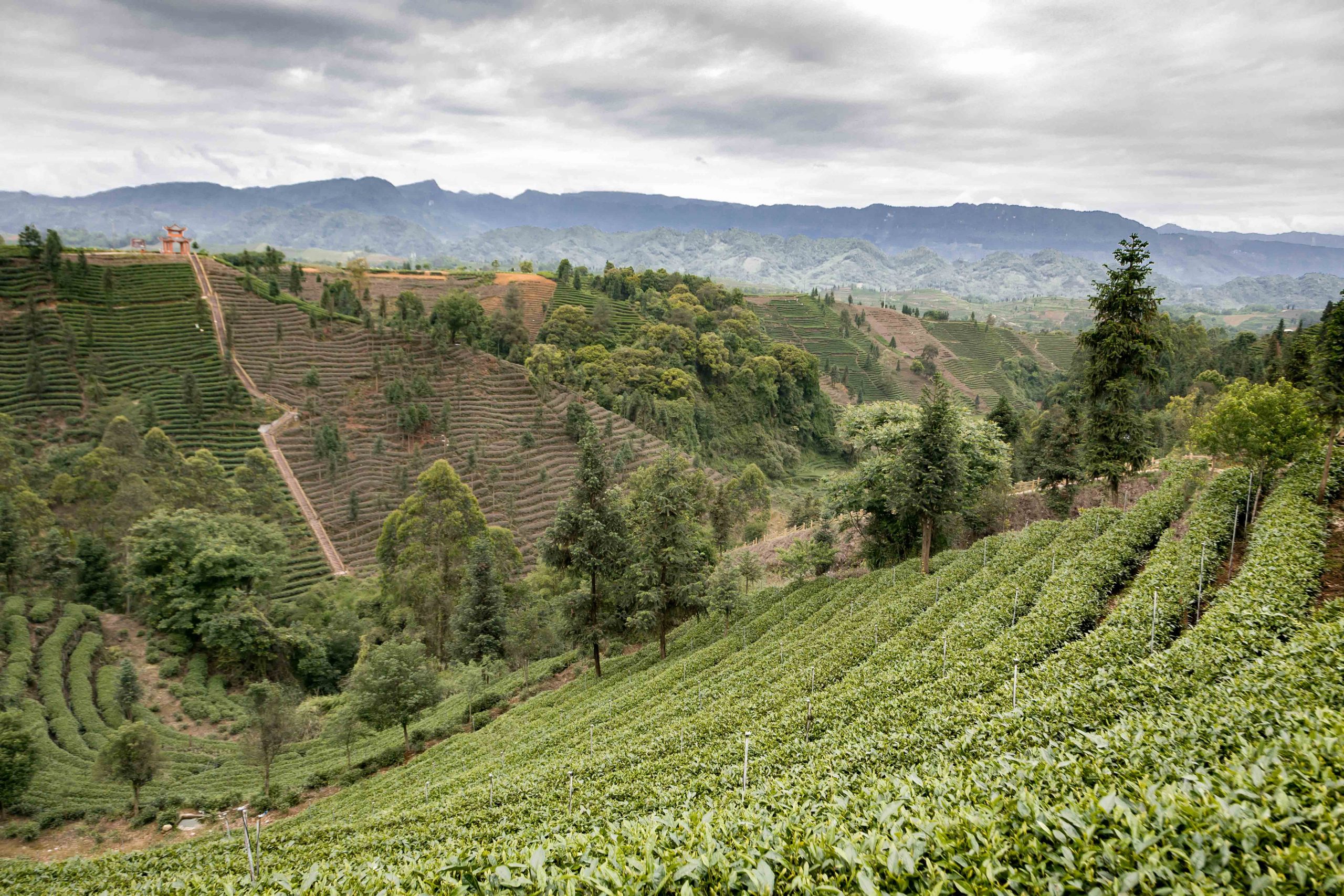 As a tea enthusiast and buyer visiting these famous tea mountain areas, as you begin to grasp the stratified points of entry to the market in terms of one given tea's quality and value, an undying quest inevitably unfolds before you: to find the best tea of the highest stratum possible. But how? Who can you trust? Generally, at every level there is an incentive for merchants to embellish or fabricate stories and claims to gouge prices.  Let us not fall prey to disillusionment and blame the individual though: this issue’s core is to be found on a systemic level. Compounded with a high degree of competitiveness within its social & economic spheres, in China there is hardly any regulation or accountability in terms of factual advertising and accurate labeling of tea.  It's a jianghu.  And yet, for all the rackets and pitfalls that this economic underbelly of partiality and obfuscation creates, there's an enticing and subliminal pulse present in a transaction always worth heeding.  At the very least, the ability to do so may foil someone's idea to take advantage of you.  And then in other situations, given the right conditions and players involved, this ability has the power to open doors unimaginable in the typical business setting of the western world.

Back down in Ya'an 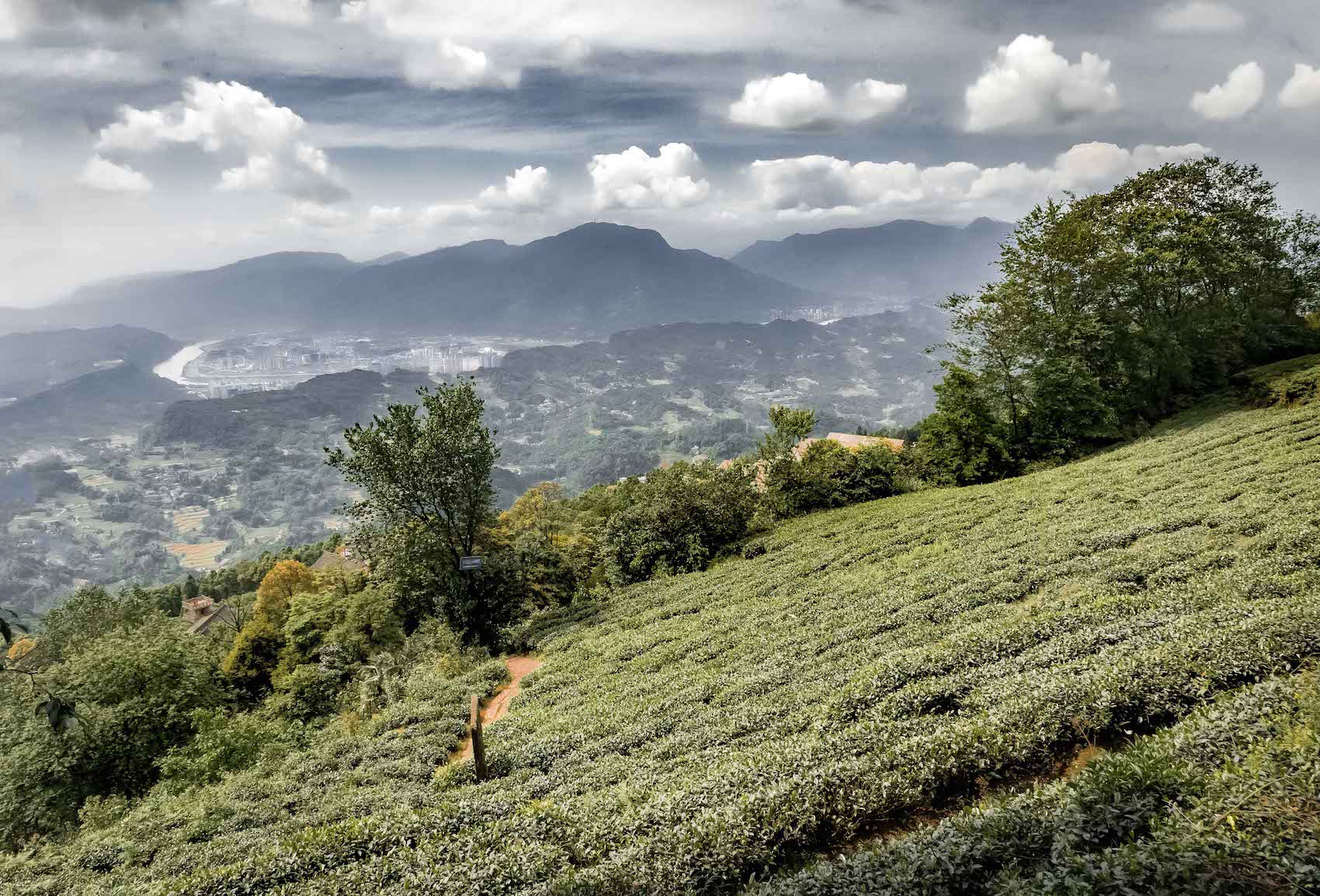 View from atop Meng Ding Shan, with the river Qingyi wrapping around Ya'an, some 2000 feet below
Heading down the mountain back to Ya'an I was reminded how small a world we live in, as we were slated to meet up with an old high school friend of mine — from all the way back home in eastern North Carolina. She had recently married to a man from Chongqing and they were 9 months pregnant! Her husband, James, previously lived and began his career in Ya’an and was excited to vacation around his old stomping grounds and show them off to his new wife.  James is a self made businessman who in true Chinese gentleman style, insisted on providing the best and most impressive time to us during our time with them. We met up with his old friend and business mentor, a man recently retired from a career as a Ya’an city official. Accompanying James and his friend, everywhere we went we were treated like next to royalty. This included being ushered into backroom banquets upon arriving a tea factory or museum, meeting the president of tea companies, getting private tours, and the surreal feeling of being graduated beyond our normal traveling peasant status all of the sudden.  It was unreal. 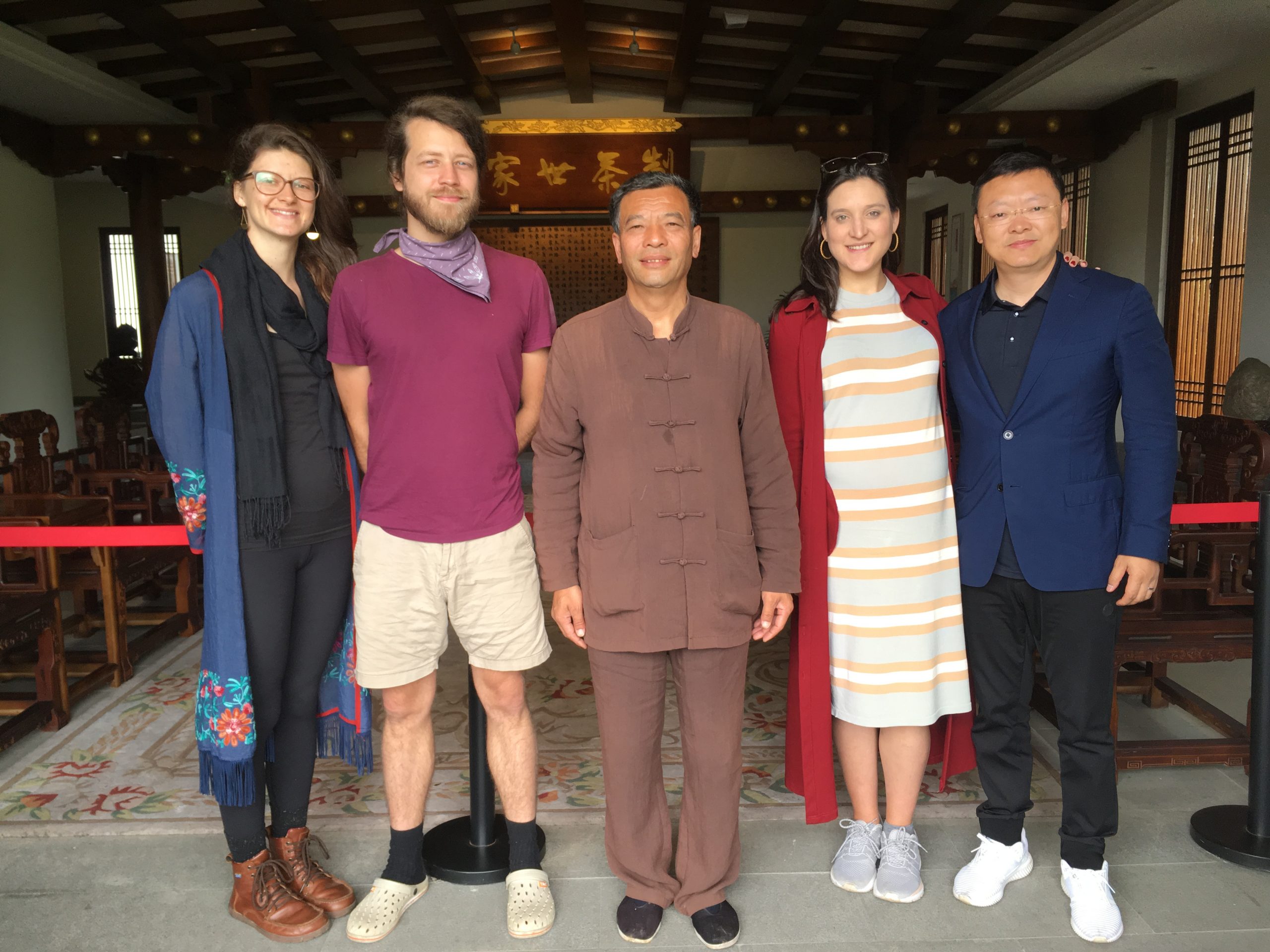 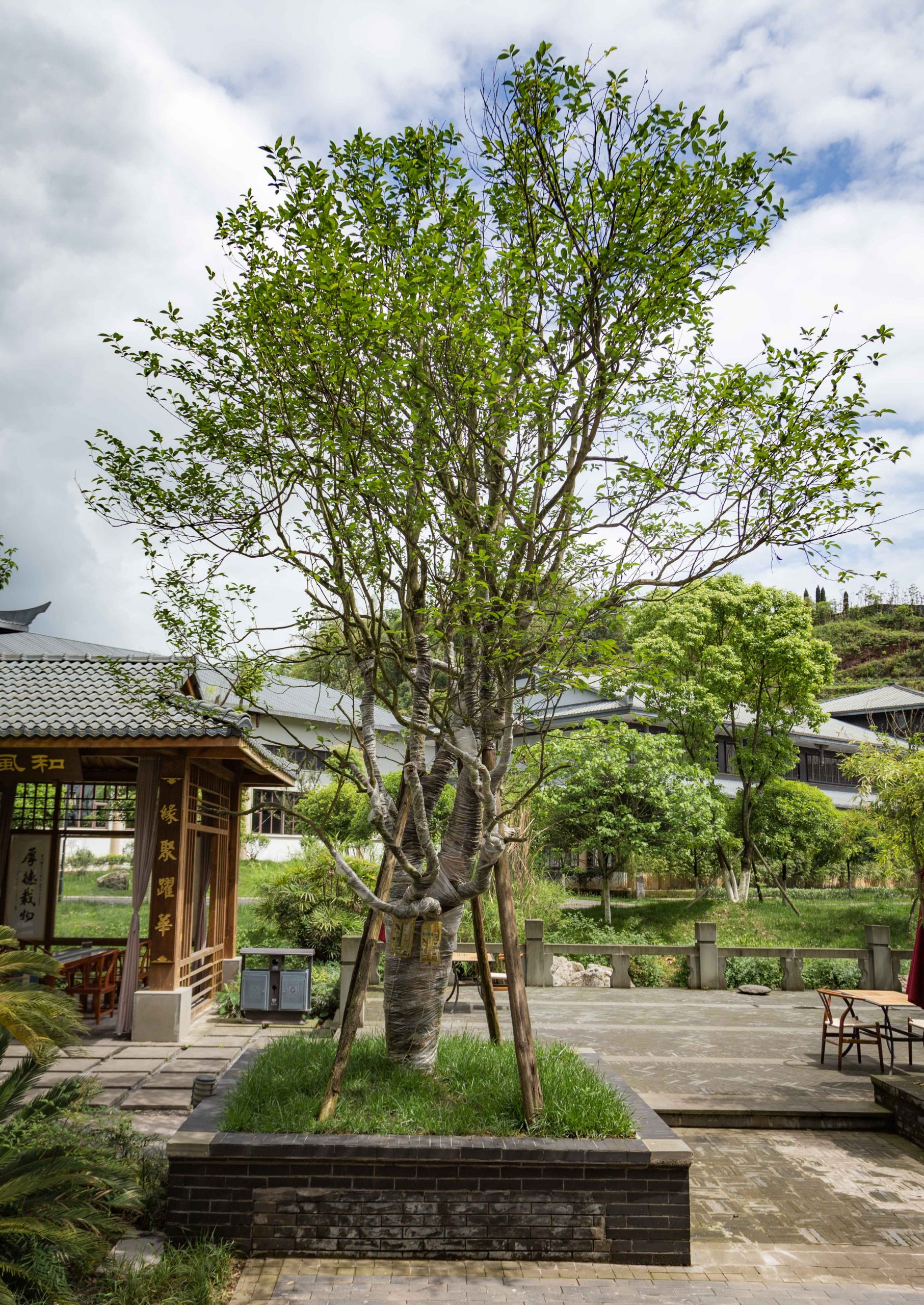 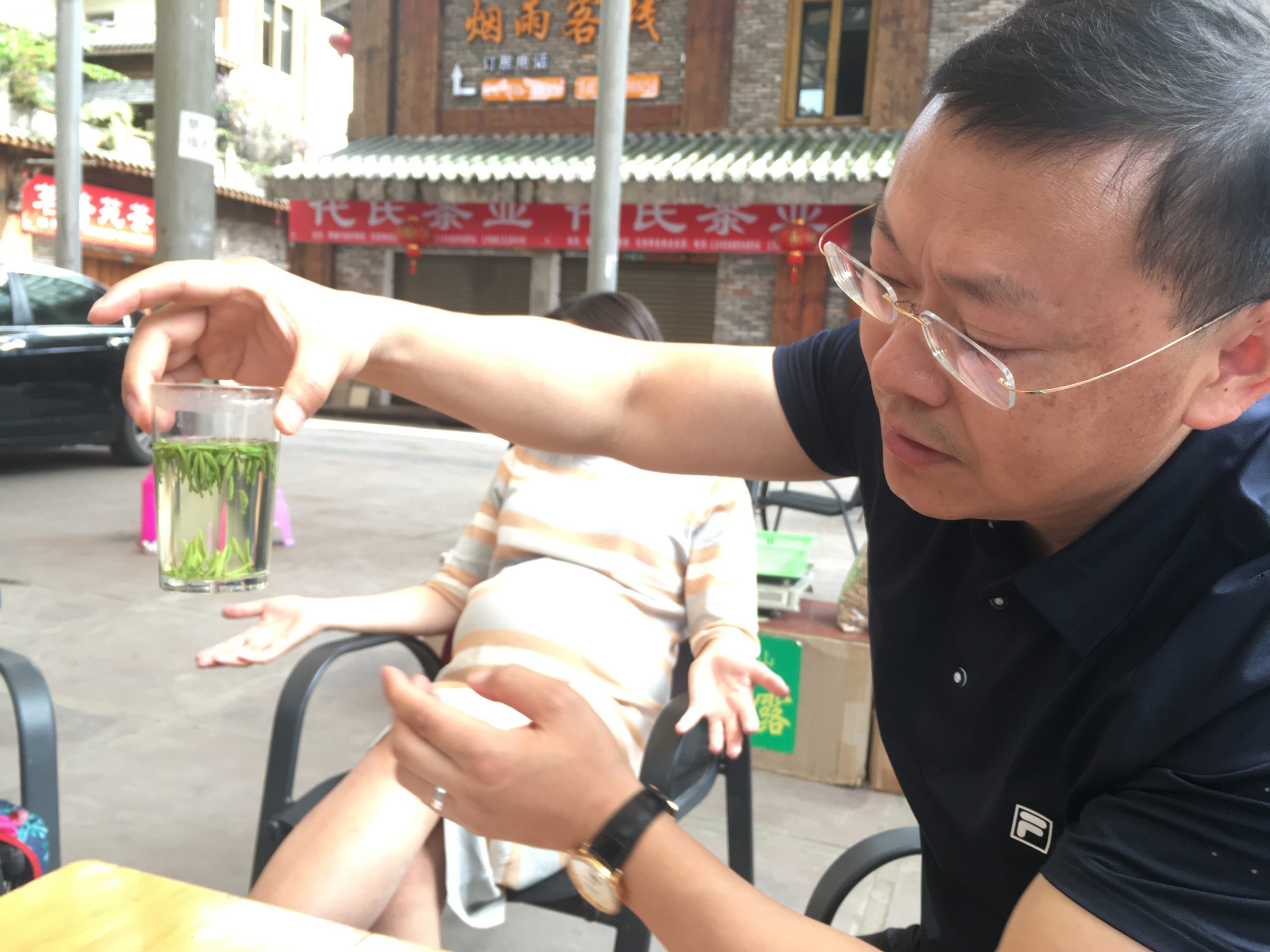 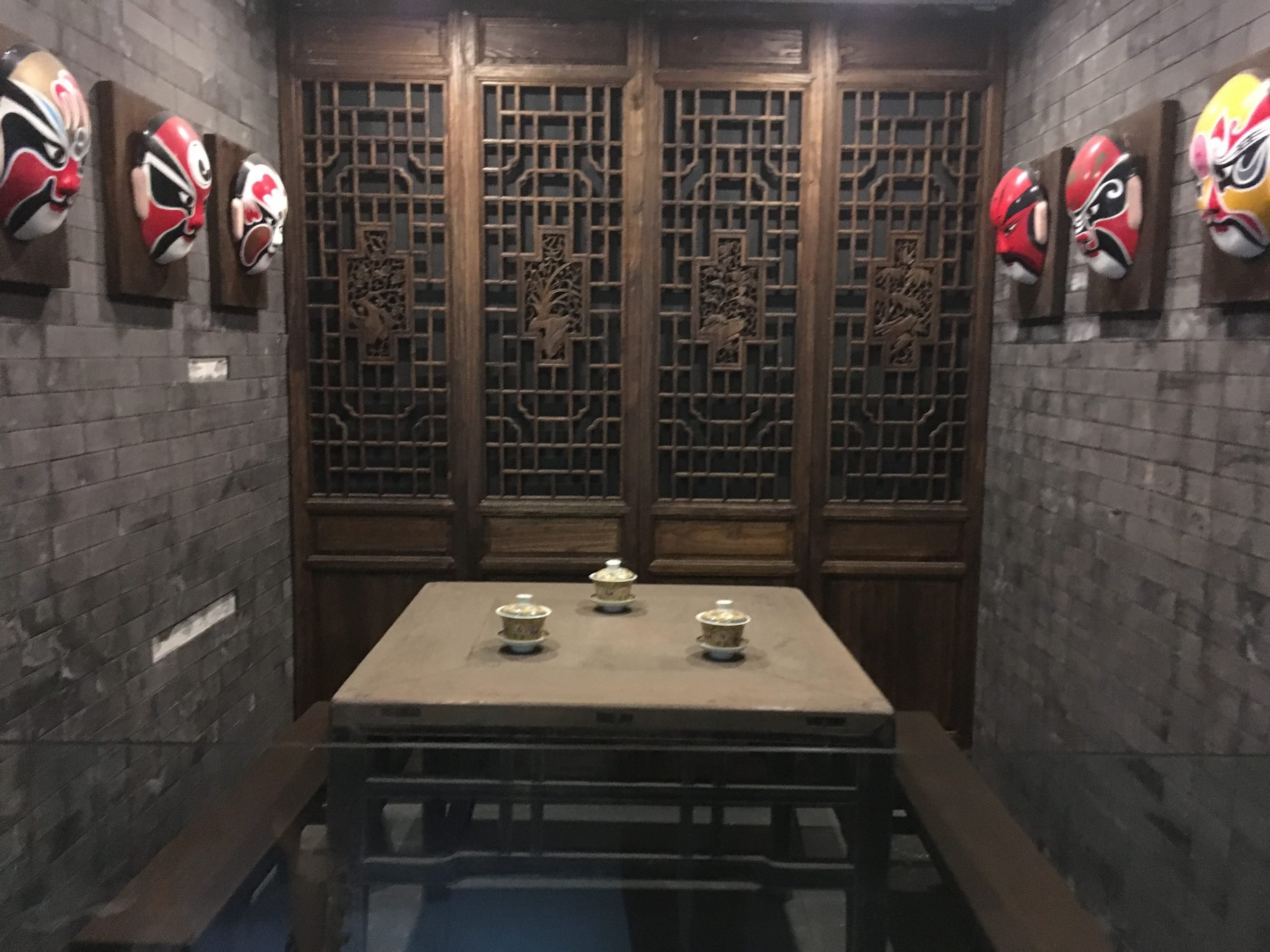 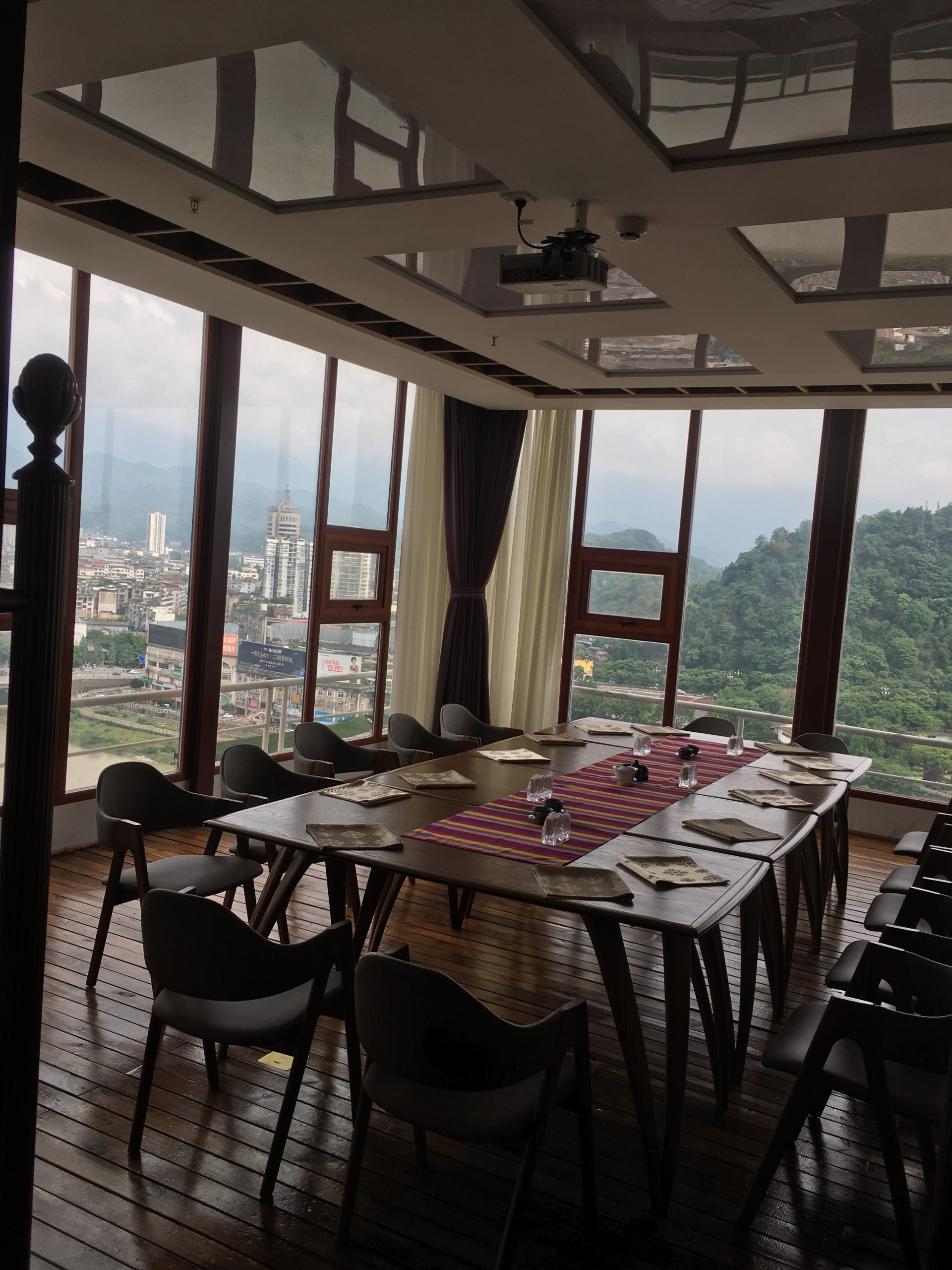 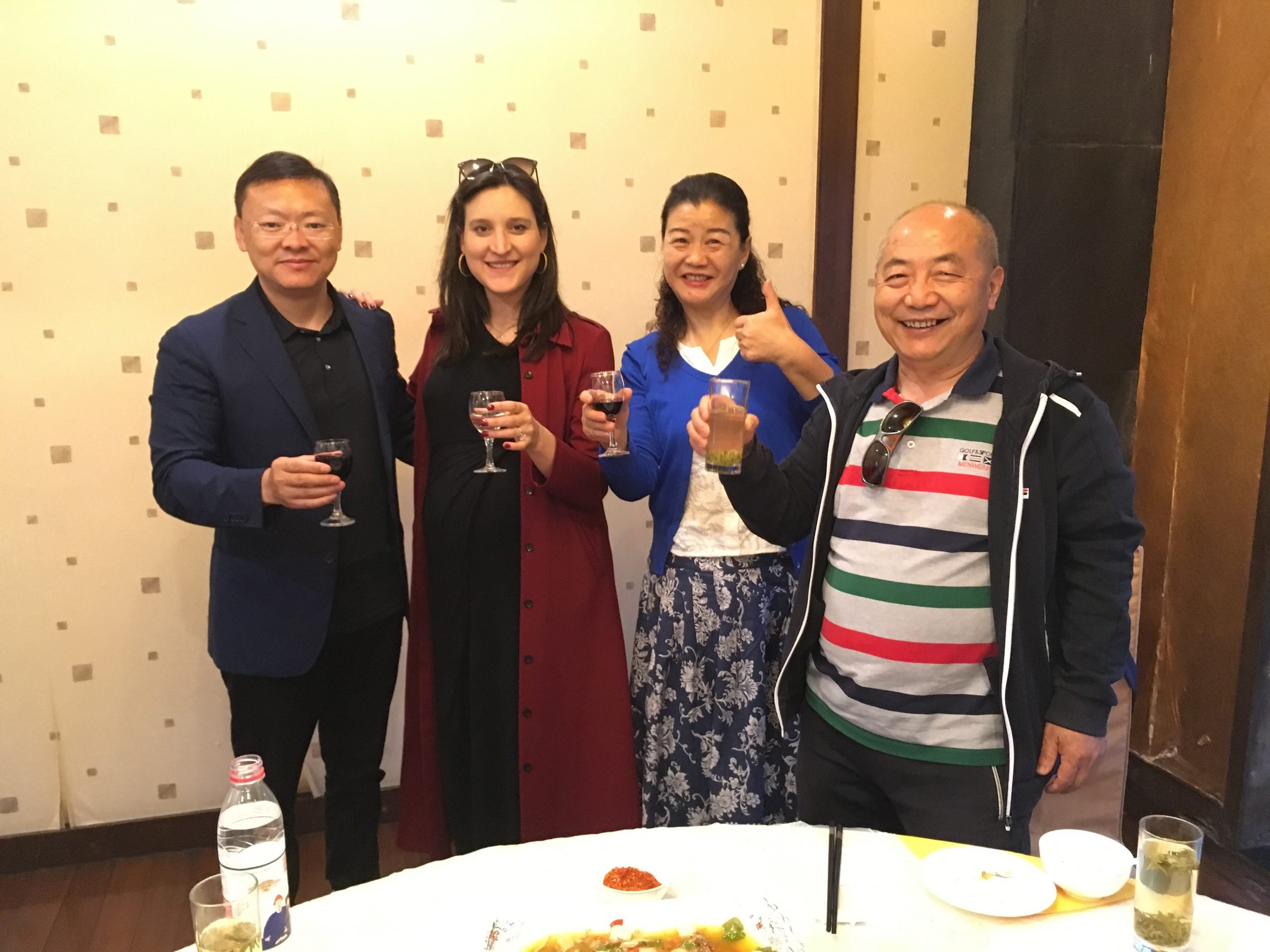 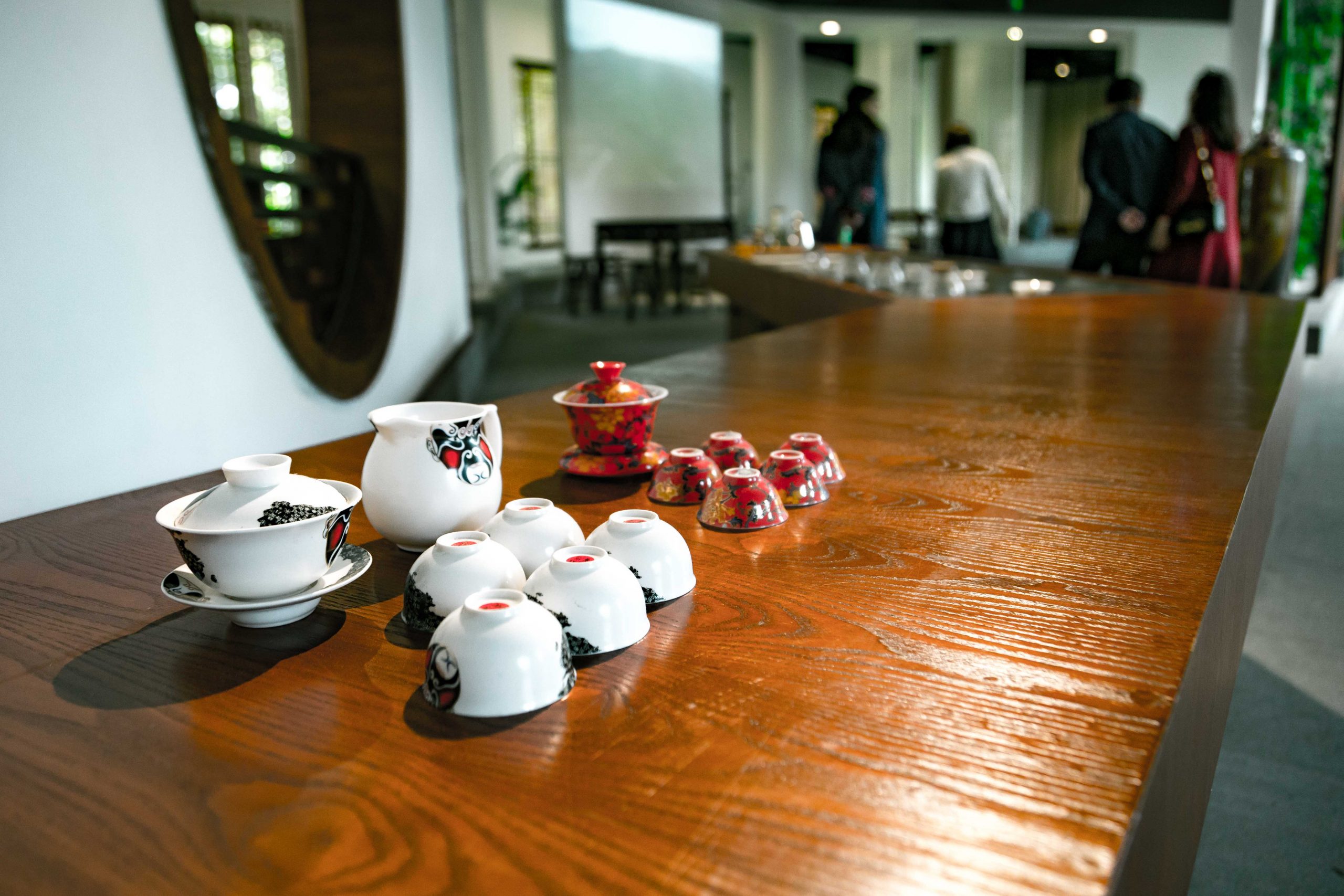 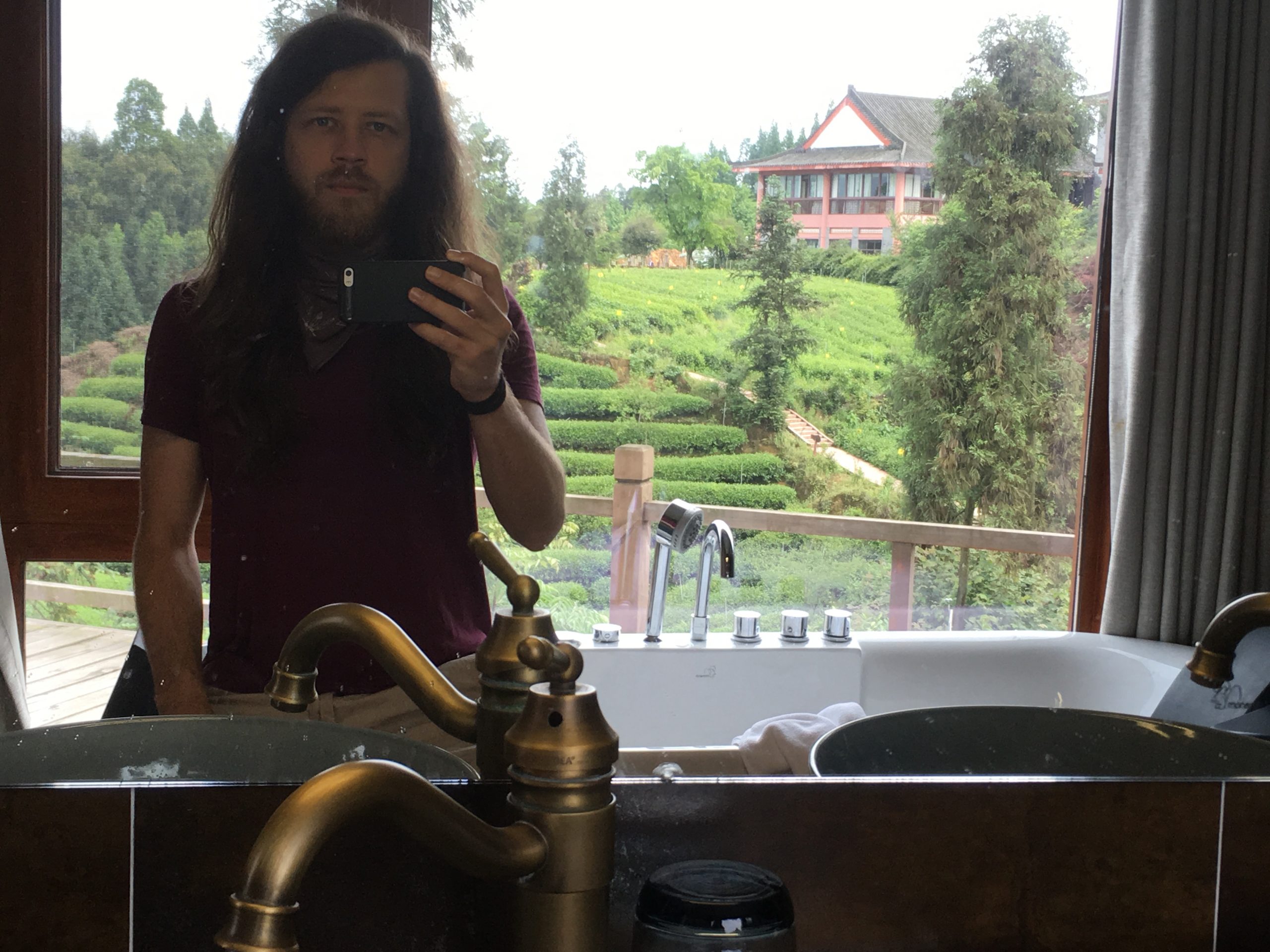 Being graced with such well-connected company meant getting around the city, learning about tea there, and meeting folks was markedly easier.  This level of access gave us the opportunity to render contacts in the Mengshan area that would allow for us to place a reservation for a small quantity of 2020 first pluck Meng Ding Gan Lu from a source that owns acreage in higher Meng Ding.  A huge thank you goes out to Alex, James, and Jiqian.  We feel fortunate, proud, and still stoked by the impact that this impish fate-orchestrating leaf has had on us and others.  Its reputation as the great connector endures.

Our adventures weren't over yet in the Meng Ding / Ya'an area. We were about to learn about a special type of post-fermented Hei cha, visit an extravagant tea themed hotel, and get a rare gritty look at the production of some of the poorest quality tea out there... not something visitors would typically get access to. To be continued in part II of this series. 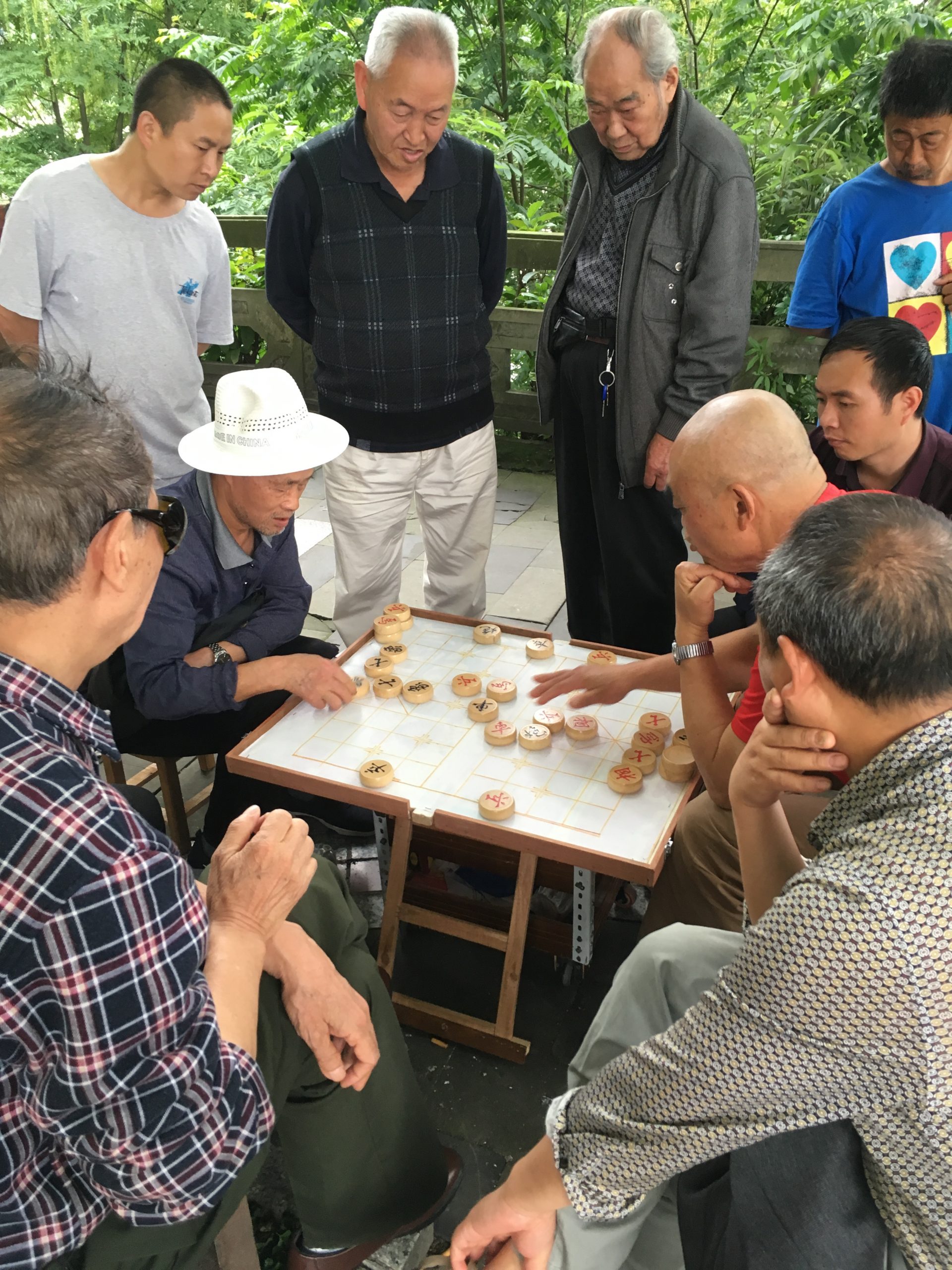