张家湾 Zhangjiawan is a small village in Mengla county in Xishuangbanna, about an hour's drive north of Yiwu township, just above Bohetang and Yishanmo village.  It sits at about 1400 meters in elevation, an hour's walk from the Chinese-Lao border, with brick-red soil, supporting tea gardens predominantly of old-growth between 5-10 meters tall.  Famous in the earlier old school days of Pu'er, Zhangjiawan was the first stop for the tea-horse road caravans hailing from any of the original six great tea mountains that were to head through Vietnam.

Zhangjiawan and its tea has a somewhat harrowed recent history, with the last 100-200 years seeing newly arrived ethnicities like the Yao people tragically fail to properly implement slash and burn farming methods, experiencing tumult from the Youle uprising, as well as seeing first-hand friction from the second sino-japanese war.  It may have been these events that lead to burnings of ancient tea arbors like the one this tea is from, and the eventual naming of this particular garden as the 火烧茶园 Fire Garden.

The trees were burned to the ground and essentially coppiced (a forestry term for cutting a tree's trunk to the ground so it sends up new growth).  The returning growth from its still-alive rootstock typically doesn't display a wide trunk as it may have originally, but rather a network of more slender and flexible boughs, known as 藤条 téng tiáo — Rattan Tea or Wicker Tea — as it resembles the weavings of a basket.  Rattan Tea can be found in other tea growing areas in Yunnan where coppicing techniques are implemented and is said produce gushu tea with higher aroma.

This sheng puer cake is another entry in the specialty terroir lineup sourced and produced by the Hé family, whose processing skills are of excellent, competitive caliber.  This tea is mostly made from the returned growth of burned ancient arbor trees, with the addition of leaves from younger growth trees planted interspersed in the garden.  The fertile and clean ecology of Zhangjiawan in the remote northeast Mengla county framed by the premier production skills makes this tea a compelling companion for one's imagination to unfold alongside the leaves in a session.

Sip to enjoy now of course, and also look forward to future character developments, as this tea was conceived and processed with the intent to be an ageable market investment. 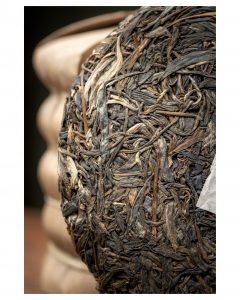 More on the Hé family: if you have checked out Jinghong Zhang's book Pu'er Tea: Ancient Caravans and Urban Chic then you are already familiar with the Hé family, as senior Mr. Hé is written about as a prominently featured tea producer that proves successful in his endeavors to retain the classic feel of the home production Yiwu tribute tea while meeting new QS standards by investing in new state of the art production facilities.  See both Mr. Hé and his son (who has now taken over the business) in this episode of Jinghong Zhang's fascinating mini documentary.

Other teas we offer by the Hé family: